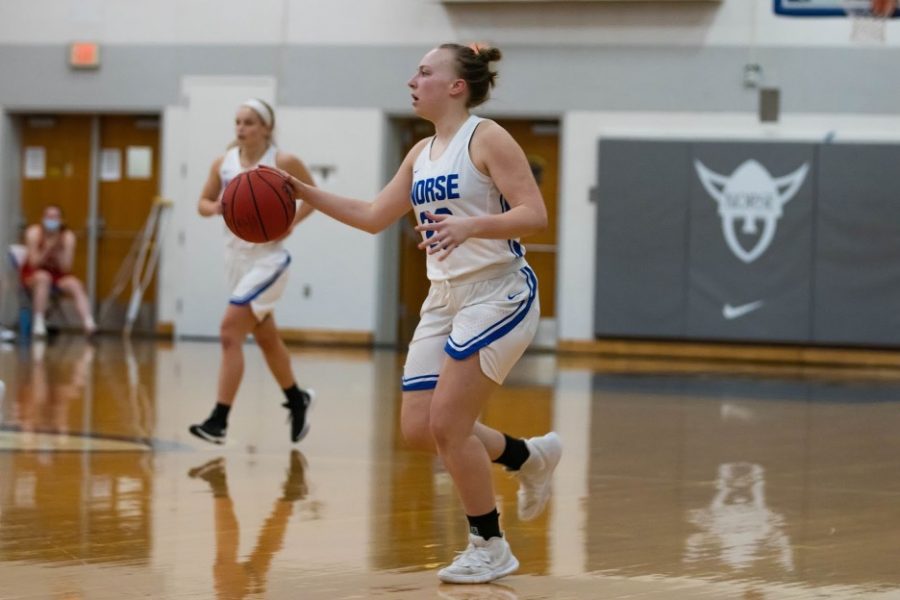 This week’s Norse of the Week is women’s basketball player Jordan Rubie (‘24). Rubie, a guard, led the Norse with 17 points in their 81-56 win against St. Mary’s University on November 28. Last season, she averaged 12.4 points per game and earned All-Conference honorable mention honors, as well as being named the team’s Newcomer of the Year.

Why do you enjoy playing basketball for Luther?

I love the team aspect. I can count on any one of [my teammates] to be there for me; I can go to them for anything. When I looked at Luther, I just felt so welcomed. The community, in general, is just so welcoming to everyone that comes here. They just provide you with a great opportunity to pursue academics, athletics, music — anything.

Could you reflect on your performance in the game against St. Mary’s?

[Winona, Minnesota] is actually my hometown, so it’s really exciting for me to play there. Personally, I wasn’t expecting to do too well; I’ve been in a little bit of a drought the last couple of games and have been trying to boost my confidence. With my [parents, family and friends] being there, it felt really good to have that support system there and also the support system of my team.

What are your personal goals for this season?

One big goal for me is to be more of a contributor and get more rebounds. I’m a shorter guard, but I can push myself to get more rebounds this season. [I can also] focus on the defensive aspect of my game: working better at it, [staying] out of foul trouble, getting those rebounds and helping out my teammates in ways that I didn’t last year.

How do you prepare for a basketball game?

I usually look over the scouting report of the team that we’re going to play, and I look over our plays so I can be ready for the game. I just try not to get too stressed out, so I just relax and hang out with my friends. I try not to focus so much on basketball where I’m getting stressed.

How old were you when you started playing basketball, and what would you tell your younger self?

I started playing when I was in third or fourth grade. Everyone in my class wanted to play basketball, so I thought I’d give it a try. In seventh or eighth grade, I started to become more passionate about [basketball]; I wanted to work hard and I wanted to succeed. I [would] tell my younger self that I found my passion later in my basketball career [and to] put in my best effort, all the time.

Who is one of your role models, and why?

My dad is my biggest role model, because he had to work for everything in his life. He played Division I football at the University of Northern Iowa, so he inspired me to become an athlete and pursue athletics in college. He works hard for everything [and] he’s always there for me. He’s my biggest inspiration because he always works hard and never lets people down. I just want to be like him.

What is a goal for the entire team this season?

A team goal that we have is to defend the home court: we don’t want to lose at home. We really want to defend our home court. [Another] one of our main goals this season is to prove the conference wrong and to upset teams. Last year, we were at the bottom of the [conference standings], and I think a lot of teams think we’ll be at the bottom this year. We want to be at the top of the conference [and] we want to succeed in the playoffs.

What is one word you could use to describe the Luther women’s basketball team?

One word that crosses my mind is family. As I said, we are always there for each other. I could call any of my teammates or coaches, and they would be there in an instant. Whether it’s helping me study, getting in extra shots before or after practice, or just getting life advice; I think that family is a big aspect of our culture on the women’s basketball team. I wouldn’t want to go to any other college; I just love the family that I’m a part of.