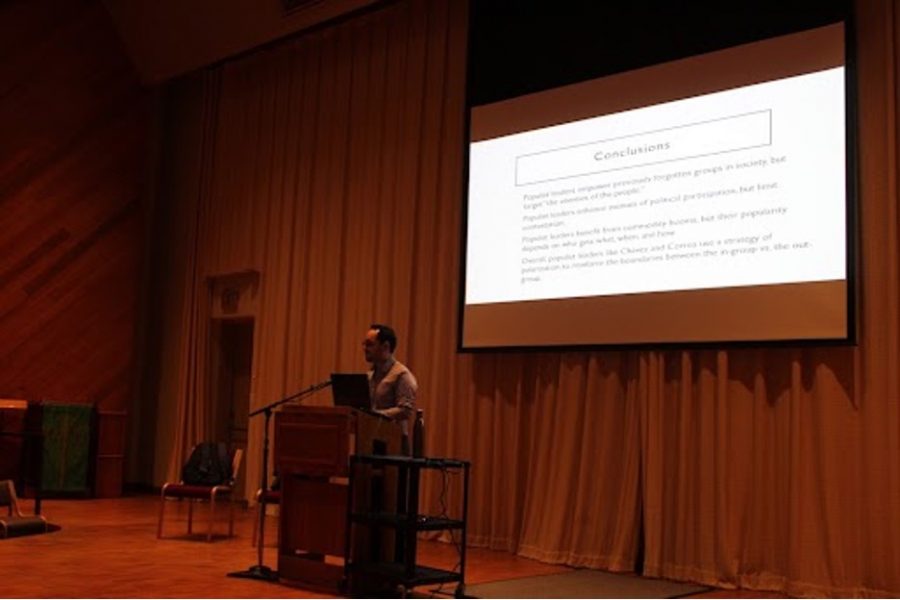 Associate Professor of Political Science Orçun Selçuk presented his lecture “Polarizing Populism in Latin America” on Tuesday, November 16, at 6:00 p.m. in the CFL Recital Hall. The lecture was based on Selçuk’s research into the ways populist leaders undermine democracy by polarizing the political environment between their supporters and opponents, with a particular focus on former presidents Hugo Chavez of Venezuela and Rafael Correa of Ecuador. His research addresses the question: How do populist leaders polarize the political spectrum between “the followers” and “the opponents?”

Selçuk began the lecture by explaining some key terms he encountered in his research. One such term was “polarizing,” which he defined as “the clustering at extreme levels of opinion, with few people in the middle ground.” In Selçuk’s research, populism was defined as “the political ideology of ‘the people,’ or those opposed to the elite class.”

He explained that populist leaders succeed by appealing to the political ideology of the people. Selçuk’s research concluded that current populist countries are currently experiencing leader polarization, a strategy that both Chavez and Correa used.

“Leader polarization is present when the elite and/or public opinion polarize over their levels of affection towards chief executives,” Selçuk said. “[Chief executives] attempt to dominate the politically marginalized groups with their charismatic persona. We are talking about a personal domination of the political spectrum.”

Chief executives are presidents in Latin America, but they can also be prime ministers in a European context. Selçuk argued that this type of political ideology was not new, as it can be seen in 1933 Germany, 1967 Greece, and 1973 Chile, along with many other historical periods and geographic locations. Selçuk explained that there are political parties that come into power on anti-system platforms of both the extreme left and extreme right.

“There is a long history of attacking the elite class in American politics,” Engelhardt said. “It probably goes back at least to [former President] Andrew Jackson. He was viewed as a populist at the time. William Jennings Bryan is also viewed as a populist leader, although there’s a populist party at that time that reluctantly endorsed him. And then there’s also other examples like Huey Long in Louisiana, George Wallace who ran on the segregationist ticket in 1968 and 1972. There’s a lot of precedent for this kind of thing [in the United States].”

Social work major Erin McCulloch (‘23) was also very interested in Selçuk’s research. She was specifically interested in how the ideas and tactics of these Latin American politicians are reflected in U.S. politics.

“Populist leaders empower previously ignored groups in society,” McCulloch said. “On the one hand, they target ‘the enemies of the people,’ or those who do not support them. I can see how this same tactic has been used by Trump, as he has empowered poor and uneducated White Americans, whose social status has been shifting in the wake of marginalized groups gaining more rights and recognition.”

Selçuk’s lecture shared how outcast groups become fervent supporters of populist leaders, and McCulloch sees that phenomena happening in the United States. McCulloch said there is a need to recognize the tactics populist leaders employ to address divisive rhetoric.

“As Dr. Selçuk said, ‘Trump didn’t create polarization, he capitalized on it,’” McCulloch said. “This lecture showed me that it’s important to recognize that leader polarization isn’t unique to the U.S., and by examining the polarization tactics used by populist leaders in other countries, we can better recognize and combat polarization.”