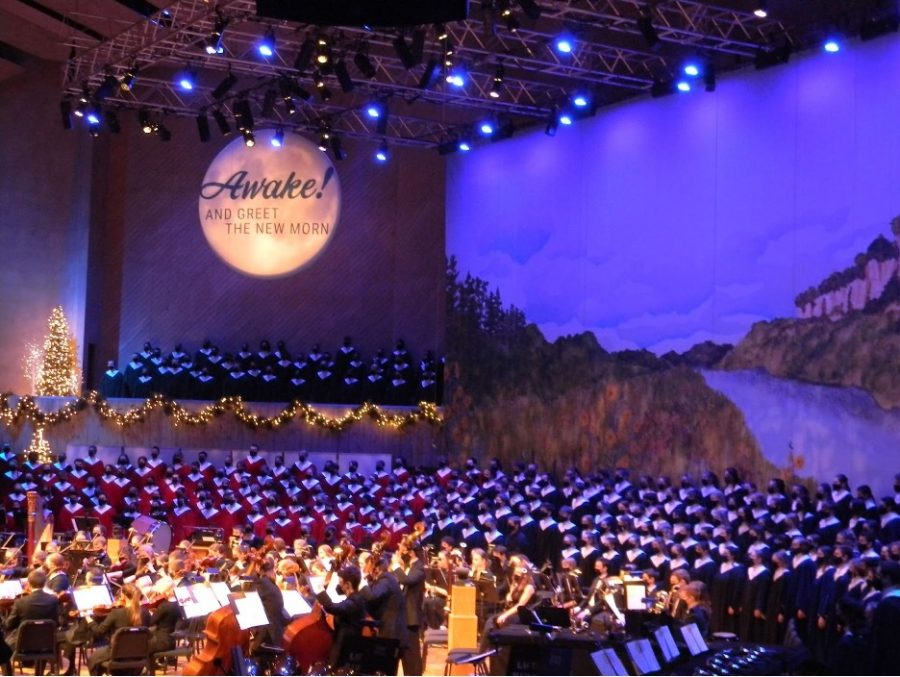 Christmas at Luther 2021 was performed under the theme, “Awake! And Greet the New Morn.” Ethan Kober (‘24) | Chips

Thousands gathered in the CFL as Luther hosted its annual Christmas at Luther event, which took place over December 2-5. This year’s performance included the ensembles of Aurora, Cathedral, Collegiate, Nordic, and Norskkor choirs, as well as the Symphony Orchestra and the Luther Ringers.

“We didn’t really have the real thing last year, most of what we did was just audio recordings,” Cathedral member Cassie Magee (’24) said. “I think, at least for me, it’s been a lot more personal. This year everything is so on-schedule and together. It feels like a real concert with all the choirs singing together at one time.”

The theme, “Awake! And Greet the New Morn,” included a diverse selection of carols, hymns, and symphonic pieces. From the exuberant opening of “Arise, Your Light Has Come,” to the triumphant ending of “Jubilate Deo,” the ensembles tackled these pieces with musical panache.

“I love the variety in the program this year,” said Assistant Professor of Music and Director of Norskorr and Cathedral Mark Potvin (‘01). “Everybody, the orchestra, the bells, Dr. Peterson on the organ and all five choirs, there is so much variety. I always think about Christmas at Luther as one piece, because there’s no applause in the middle. From the first down beat to the last cut off, that’s the piece.”

Indeed, the interweaving of musical performances and narrations were designed to give audiences an impression of unity, despite the concert being divided into different segments. After the mass opener, the Symphony Orchestra performed “A Midsummer Night’s Dream” by Mendelssohn, followed by solo pieces by both first-year ensembles, Norskkor and Aurora. “Brightest and Best” by Shawn Kirchner and “What Sweeter Music” by Eleanor Daley were performed respectively. Nordic Choir performed “Lost in the Night” by Christiansen before all three upper-class choirs joined the orchestra on stage for “Choral Fantasy” from Beethoven’s Fantasia in C Minor.

There were also several instrumentals in the mix, with the Symphony Orchestra playing Bizet’s L’Arlesienne, and the Luther Ringers playing Mokelbust and Smith’s “I Want to Walk as a Child of the Light/Bring a Torch, Jeanette, Isabella.” Professor of Music and College Organist Gregory Peterson also was featured in an organ solo, performing Théodore Dubois’ “Fiat Lux.”

The penultimate piece brought everyone together for the candle lighter, the traditional Irish tune “Wexford Carol,” as arranged by Elaine Hagenburg. The small flames slowly spread out across the choirs, illuminating the faces of the packed audiences that had not been there a year prior.

Although the performer’s focus is primarily on the audience and presenting the best show possible, it is those students involved who directors hope will receive the most from Christmas at Luther.

“I hope that this experience will be a bit like a healing rain after a drought,” said Assistant Professor of Music Adrianna Tam, who directed Aurora and Collegiate choirs during the performance. “I hope they’re able to be above the potential stress and anxieties that come along with all of their tricky transitions and the vast amount of music they memorize. That they can ultimately look past that and be present in this moment and in these moments that we have learned are not to be taken for granted.”