VPA marks return to live theater with Heathers: The Musical 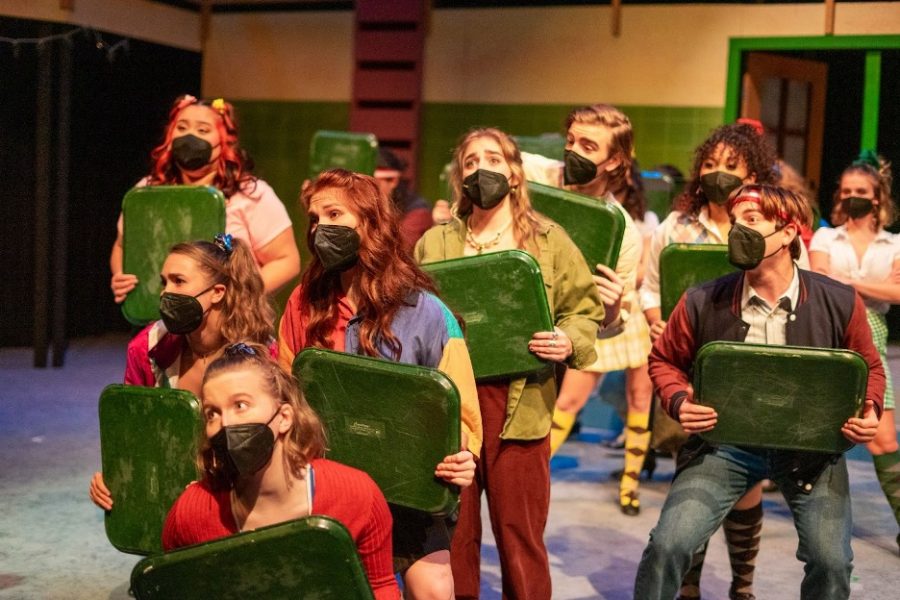 Tosha Guldan (‘23) was at work this summer when she learned that the Visual and Performing Arts department’s fall production would be Heathers: The Musical. Guldan proceeded to listen to the musical’s soundtrack on her way home, and immediately felt drawn to the show’s protagonist, Veronica. Mid-November, the full cast and crew opened the musical for a live audience, with Guldan in the lead role.

Spanning seven shows over the course of 10 days, the production showcased a range of talent, hard work, and dedication from Luther students, supported by the direction of the VPA faculty. The show ran for two weekends, Nov. 11-13 and 17-20, in Jewel Theatre, located in the CFA. Guldan expressed the exhilaration she felt being back on stage after the disruption of live performances caused by the pandemic.

“At the beginning of the show, I have a big quick change,” Guldan said. “I come back out and every night that moment is so exciting. Being out there again I realize, ‘Oh my gosh, I’m doing it!,’ and that reminds me why I perform.”

The musical is based on the 1989 black-comedy Heathers, starring Winona Ryder as Veronica. Veronica longs to be popular, but when she finds a way into the “Heathers” clique, things take a turn for the worse. Veronica becomes something of a bully herself, and even ends up murdering several of her classmates alongside J.D., her edgy new-kid boyfriend.

Adapted as a rock musical in 2010 by Laurence O’Keefe and Kevin Murphy, the play explored several intense and dark issues, such as gun violence, teen suicide, sexual assault, and bullying. The show depicts these themes in a comedic manner, challenging the audience to examine the cruelties and trauma that society has normalized and humorized. Guldan spoke about the steps the cast took as they faced these themes every night as their characters.

“It’s not always easy to separate yourself from your character,” Guldan said. “I think it’s really important to talk about these topics beforehand as a cast, so that when you do get to those difficult spots in the show, everybody knows where everyone is at.”

The set depicted a high school setting, utilizing the floor and catwalks of Jewel Theatre, with the pit accompanying the cast from the balcony. Constructed entirely by student volunteers as a part of theater major Phil Royer’s (‘22) senior project, the set brought to life the setting of a 1980s high school.

Audiences were eager to celebrate the return of live theater and support the VPA, as the house was full nearly every night, with several performances even selling out. Christian Jensen (‘25), who played a “belligerent geek” in the ensemble, shared how the cast engaged the live audience in the flexible space that Jewel provided.

“Jewel Theatre is a unique space that has that black box feel, where we can set up and change it however we like,” Jensen said. “It’s cool how close and intimate we can be with the audience. We try to connect with them, which I feel gives it a personal touch.”

The musical was an intense and provocative return to live theatre for the VPA, after a two year hiatus which consisted of various streamed performances. Director and Associate Professor of Theater Robert Vrtis expressed how he approached the unique challenge that a musical presents by encouraging the cast and crew to share their creative input.

“When you’re going, going, going, it’s easy to lose your artistry and the collaborative spirit,” Vrtis said. “Musicals are tough because they require a lot of coordination from a whole lot of artists who have a whole lot of different ideas and input. The leads are fantastic, but the ensemble is quite fun and surprising in their dedication and creativity and making sure their tiny scenes are crackling with energy.”

Both the audience and actors were masked throughout the performance, which frustrated several members of the cast, as they felt it limited their expressive capacity. A projector screen displayed full captions of script and lyrics to assist those who are hard of hearing. This measure is an accessibility move the VPA plans to continue implementing. Programs were provided to attendees, which included a trigger warning, as well as a director’s note from Vrtis that shed light on the meaning of the show.

Attendee Elise Wilson (‘24) noted the power of this performance as a reflection of real human issues.

“It’s hard to grasp that these are realities when they’re portrayed in a musical,” Wilson said. “Theatre is a vehicle to present and reflect issues that people deal with constantly in a way that humanizes them, and makes it easier for society to understand.”