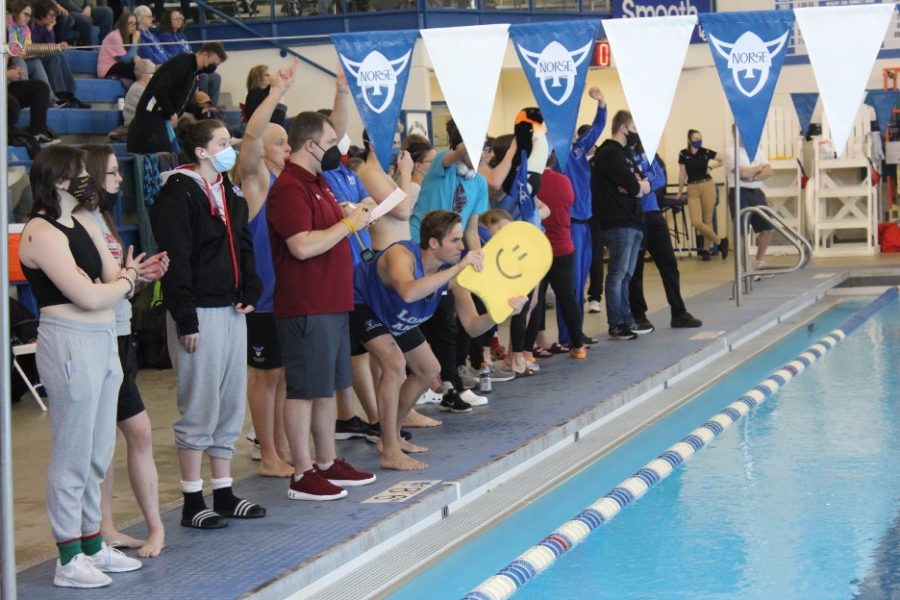 Over the course of four days (Feb. 9-12), Luther College hosted the American River’s Conference Swim and Dive Invitational. This event was the culmination of a full season of meets, and positioned Luther against four other schools in the ARC, from which Luther emerged victorious.

The Women’s Swim and Dive team has a 4-3 record for the season, while also placing fifth of six, second of six, and third of seven in the Coe, Macalester, and Grinnell Invitationals respectively. They placed first in the ARC meet last weekend with a total of 708.5 points total. Coe College came in second with 312 points, followed by Nebraska Wesleyan University with 307, Simpson College with 245.5, and Loras College with 244 points.

The Men’s Swim and Dive team went into this meet with a 3-3 record for the season, also placing third of five, second of four, and third of seven at the Coe, Macalester, and Grinnell Invitationals. They also placed first as a team in the ARC meet with 604.5 points total. Nebraska Wesleyan followed with 564.5, Loras with 357, Coe with 290, and Simpson with 14 points. In addition, Luther diver Jack Bell (‘25) was awarded the Men’s Diver of the Meet merit, qualifying for the NCAA III Regional Diving Championships, and Head Men and Women’s Swim and Dive Coach and Director of Aquatics Center Aaron Zander (‘10) was named the Men’s Diving Coach of the meet.

“A lot of different things came into this meet,” Bell said. “On the swimming side of things, we like to taper, we work our butts off all year, and then we rest to allow our bodies to refresh for the meet, and in diving we do the opposite, we reeve things up. It can be challenging, but I think just leaning on your resources, your teammates, and your coaches is huge. I give a lot of credit to all of the swimming and diving coaches, especially Coach Zander, for doing all the behind the scenes work for us to show up and have fun competing.”

Coach Zander has seen improvements in the team in the three years he has been coaching at Luther. As a member of the Men’s Swim and Dive team when enrolled as a student, he was on three championship teams and personally holds a championship title in the 200 backstroke. As head coach, Zander has been particularly focused on finding a balance between the performance of his athletes and the physical demands placed on them during practice.

“Training wise, we trained an insane volume of yards,” Zander said. “The burnout in swimmers when I was here was pretty high. There were at least three or four [swimmers] just on the men’s side who wouldn’t continue year by year. We were very talented, we were a very good team, but it was tough. My focus is not on burning swimmers out, it is on swimming the correct volume of yards, at the correct intensity, with a very intentional mindset while we are doing it, so I don’t have to destroy people’s shoulders or hips or knees.”

Zander is focused on building athletes who enjoy the sport and have fun. This meet was the culmination of an entire season of training and competing. Zander said it would be the meet where they would swim their fastest.

“In terms of our season, we start pretty low and ramp it up in terms of yardage,” Zander said. “When we hit December and January, the intensity goes up too. Now we should see the results peak. It really is the culmination of a full season.”

As the swimming and diving season is one of the longer sports seasons on campus, methods to training must be intentional and focus on the long term. Jack Meehan (‘23), who swims individual medley and breaststroke, spoke about the training methods the team has used recently.

“You really have to focus in towards the end of the season,” Meehan said. “You have to start focusing in on specific things you want to do and technique. We visualize before practice sometimes. When you start doing fewer yards, you have to be more intentional about what you do.”

Along with training in the pool, Zander also stresses the importance of team bonding and cohesiveness. He encourages those on the swim and dive team to not only be teammates, but to be friends. Creating connections outside of the pool translates to practices and meets.

“You can do anything when you have teammates behind you that you know support you,” Zander said. “You can work harder in practice, you can swim faster at meets. You will always be able to compete at a higher level when you know the people around you support you versus swimming with the mindset of just yourself. The group swimming with a team behind them will always be faster.”

As a Women’s Swim and Dive team captain, Anna Thomley (‘23), who swims distance freestyle and individual medley, is not only in charge of leading and hyping up swimmers in the pool, but also organizing different bonding activities. She also feels those who are friends outside of practice train and swim better.

“Since we are so close, it helps us train in the water better,” Thomley said. “Since we know each other’s personalities and speeds, we can talk in and out of the water during practice and bond as a group. We can push each other during meets like when you get behind that lane and you cheer someone on who is one of your best friends in the whole school, it’s kind of special to be so close to those people.”

Looking forward to next year, the team hopes to continue strengthening connections with each other and to keep winning races and meets. Zander hopes his team can build on the progress made this year and translate that into another championship-winning team next year.