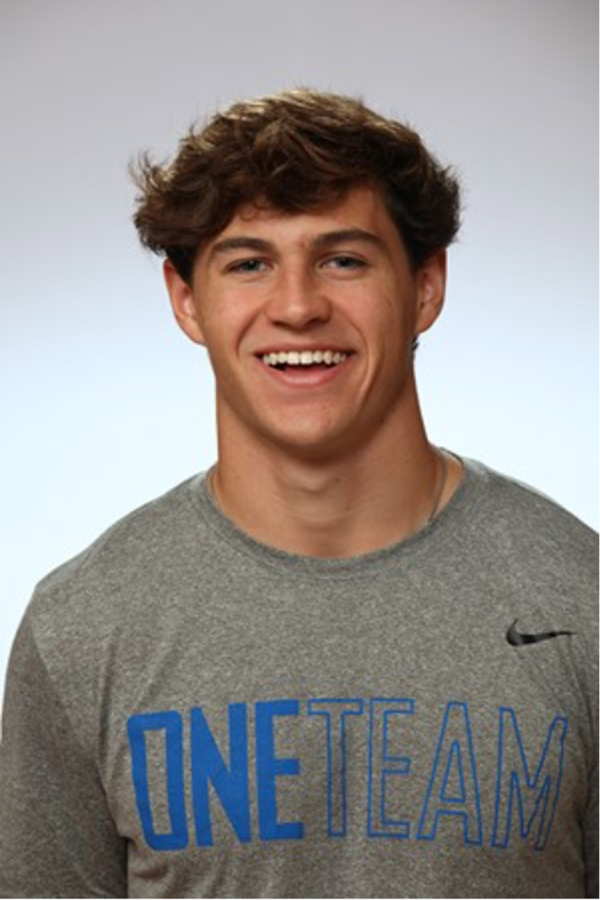 This week’s Norse of the Week is Men’s Swimming and Diving team member Jack Bell (‘25). On Feb. 12, Bell received the American Rivers Conference Invitational Men’s Diver of the Meet award, in recognition of his performance in both the one-meter and three-meter dives, in which he scored a point total of 434.10 and 434.35 respectively. The former qualified Bell for the NCAA III Midwest-South-West Regional Diving Championships, which will be held at Trinity University, Texas, over the weekend of Feb. 25-26. On the swimming side of things, Bell placed third in the individual 100 backstroke, and participated in the 400 freestyle relay, 200 freestyle relay, and 200 medley relay.

Were you surprised by your performance in the invitational?

In the beginning of the year, Coach [Aaron] Zander and I had talked about the national cut, and that being a goal of ours, but throughout the season I didn’t know I would be that close to it. I thought I had a good day, I reached the goal, but that wasn’t really my focus for the meet. I was just there to do my best and help the team out with points overall for the conference championship – the national cut just happened to come with it

What were your personal goals for your overall swim and dive season?

I knew I could help out on both ends, because I swim and I dive. I knew for my team that there were a couple other divers that we could go one-two in both the diving events, which we did. It was a personal goal of mine to get as many points as I could for the team, because the men’s team was definitely a bit of an underdog going into the conference. On the swimming end, for every relay and individual event my goal was to get as many points as possible. It wasn’t based so much on placing individually, just trying to get points for my team.

What do you enjoy most about swimming at Luther College?

The swim team is so big here, it’s different from high school, because here you kind of have a co-ed team, it makes the team feel like just one really big family. Everyone is super supportive, we’re all about having fun and enjoying ourselves. We worry less about times because everyone has their own best time that they can strive for.

What do you enjoy most about diving at Luther College?

Diving is a sport that not a lot of people do. It’s a smaller population of athletes, but I love that we still can push each other to try new dives and joke around, it’s just another, bit smaller family. The atmosphere of a family is what I will remember most from my freshman year of Luther Swimming and Diving, versus any of the awards or stuff.

How did you prepare for this meet?

A lot of different things came into this meet. On the swimming side of things, we like to taper, where we work our butts off all year and then we rest, doing shorter practices, so our body is refreshed for the swim meet. For diving, we ramp it up, we do the opposite, we try to get more new and harder dives in. I think a big thing that helped me this year was visualization. I do that for soccer as well – it’s pretty easy to have success when you have already gone through the motions in your head, you know how it’s going to go. If you can picture yourself doing it perfectly, it makes it a lot easier when the time comes for you to compete.

Who is your biggest inspiration when it comes to swimming and diving, and why?

I always tell everyone that I was not originally planning on doing swimming and diving in college, my focus was actually soccer. As much as I love soccer, I thought it was a pretty cool add-on that I could do both swimming and diving too. I would say my brother – he was a huge swimmer in high school – he kept me in the sport in high school and helped me to think about doing it in college. Our senior captain Matt Benson (‘22) kept me going, working hard every day. A big reason for a lot of the success for the team and me individually was Matt pushing us as a leader.

What is it like balancing multiple sports at Luther?

Doing three sports is definitely not the typical college life, but it’s what I’m used to from high school. Obviously, the time commitment and academic expectations are a lot more challenging in college, but I think a big thing is just leaning on your resources, your teammates and coaches. I give a lot of credit to all of the swimming and diving coaches, especially Coach Zander, and also all of the soccer coaches, specifically Coach [Chris] Garcia-Prats, for helping me to balance everything. They do all the behind-the-scenes work to make sure I get to where I need to be, so I can just show up and compete.

When did you start swimming and diving?

I started swimming at age three or four. My mom wanted my siblings and I to learn how to swim as a safety skill; I think that’s actually how a lot of people get into the sport, just learning it as a way to stay safe around water. We have a local pool and rec league that I joined when I was around four, and I just basically lived there during the summers. Swimming was always in my life, it wasn’t really the big sport for me, but I always enjoyed it. Diving, on the other hand, is a sport that no one in my family had done before, I started that around age six. I was always impressed by the people who could do tricks off the board in mid air, so I tried to learn some, and that got me into competing.

Why did you choose to swim and dive for the Norse?

A couple weeks before I came on my first visit here (for soccer), I had the idea that diving might be something I would enjoy here. I didn’t really talk to my parents about it, but I emailed Coach Zander and told him ‘I don’t know any scores or what the competition is like for diving in DIII, but you tell me, here are my scores,’ and he embraced it right away, and encouraged me to join the team. At that point, I thought ‘why the heck not?’, and I sent him my swimming times too. He told me that if it was something I wanted to do, they would make it work for me. So, Coach Zander is a big reason why I came to Luther for swimming and diving, he was just so open and welcoming. It was less about my scores and times, and more about having fun and being supported. When I met him and the team for the first time, I knew it was a family I wanted to be a part of.

What was your favorite moment from this season overall?

The Swim and Dive season this year had a lot of ups and downs, with Covid levels changing and meets being canceled, but my favorite moment was when it all paid off. I was grateful to be on the last relay of the conference meet, which is the last event. Being on that relay and realizing that we had accomplished our goal of winning the conference, and being able to embrace that with the two senior captains, Matt [Benson] and Issac [Christopherson], that was my favorite moment. Everyone was so excited, it was so loud, and I loved watching my team be so happy that we did it together.