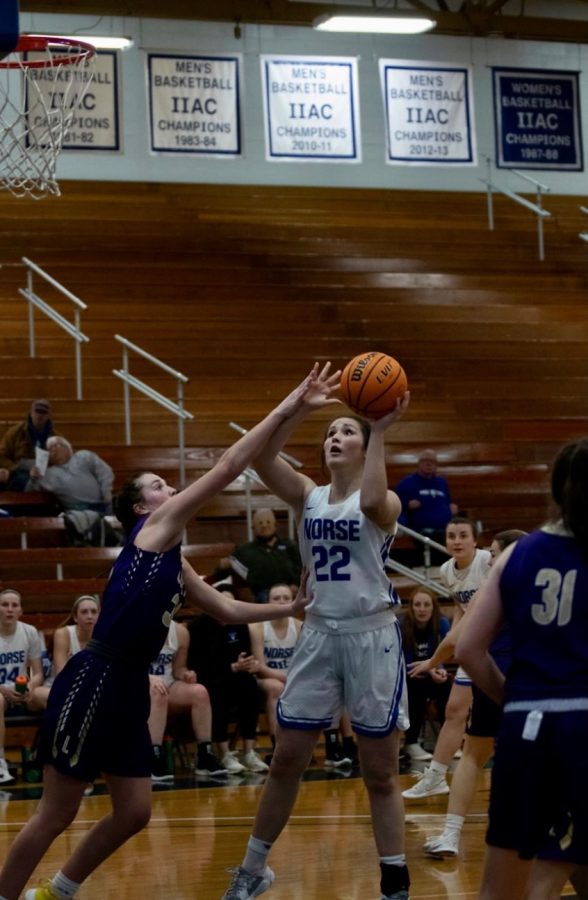 Kailey Jones (‘25) scored for the Norse in their game against Loras on February 9.

This week’s Norse of the week is Women’s Basketball forward Kailey Jones (‘25). Jones set a women’s basketball single game rebounding record (24 rebounds) during Luther’s 79-65 victory over Central College on February 12, and on March 2 was named second-team all-conference. Jones led the Norse in scoring for the season, garnering 314 points and 264 rebounds over 27 games.

Were you surprised by Luther’s 79-65 victory over Central College?

I wasn’t surprised at all, because I knew we could do it. We needed to come out and conquer Central in order to secure our place in the tournament. Having that in mind, I was just really happy with the way we came out and played and executed everything we needed to do. I felt like it was one of the best friendly plays we’ve had together as a team. Everyone was contributing on their sides and trying their best. It was the team’s effort, winning in this game.

What were your personal and the team’s goals for this season?

What do you enjoy most about playing basketball for Luther College?

I love how united and like a family we all are, on and off the court. We are always together and there for each other in and outside the classroom. I like having the aspect of constantly having people around, which translates to court and makes playing with one another more fun and enjoyable.

How do you prepare for a basketball game?

In practice, [the team] starts by watching a film about the team we will play, and then we get a scouting report, and then focus on the players individually and what to learn from them. We also go through sets to familiarize ourselves with what we will be seeing. I personally read my scouting report a lot, keep it on hand, so that if I have any questions I can go back. I also watch players I will be guarding to get prepared. Additionally, I make sure I get enough proteins the day before the game.

Who is one of your role models, and why?

My celebrity role model is Dennis Rodman, who played for the Chicago Bulls. He was an amazing rebounder. Though he would score minimum points, he would have crazy rebounds in almost every game. I liked the way he would sit and watch where different players shot and where they missed, and embraced every role and did very well. I loved the episode when he spoke and explained his role in the Michael Jordan documentary, The Last Dance.

How did you get started playing basketball?

I started playing basketball when I was six, in kindergarten. However, in the fourth grade and a great portion of eighth grade, I initially thought softball was the sport that I really wanted to pursue. After eighth grade, I realized basketball was more of what I really wanted to do. What made me shift was that I was a pitcher in softball, so I was always pitching off season, and basketball came like a break and escape for me. When I realized it was more fun than softball, I decided that was what I wanted to put my time into.

What would you tell your younger self when she decided to choose basketball over softball?

I would tell her that she made the best choice, as basketball is definitely the sport for her. I still love softball, but at the level I am right now, I think choosing basketball was the best decision.

As a nursing major, how do you plan to merge this rigorous course with Basketball?

There will be a lot that goes into nursing, especially next year. However, some of my teammates are also in the nursing program, so I will be utilizing them for advice on how to get through it. I also personally like being busy, as it gives me the habit and discipline to do certain things, and ensure I do them right.

What would tell someone who is considering Luther and its Women’s Basketball team?

I would assure them that they will find 25 girls that are going to be there for them 24/7.