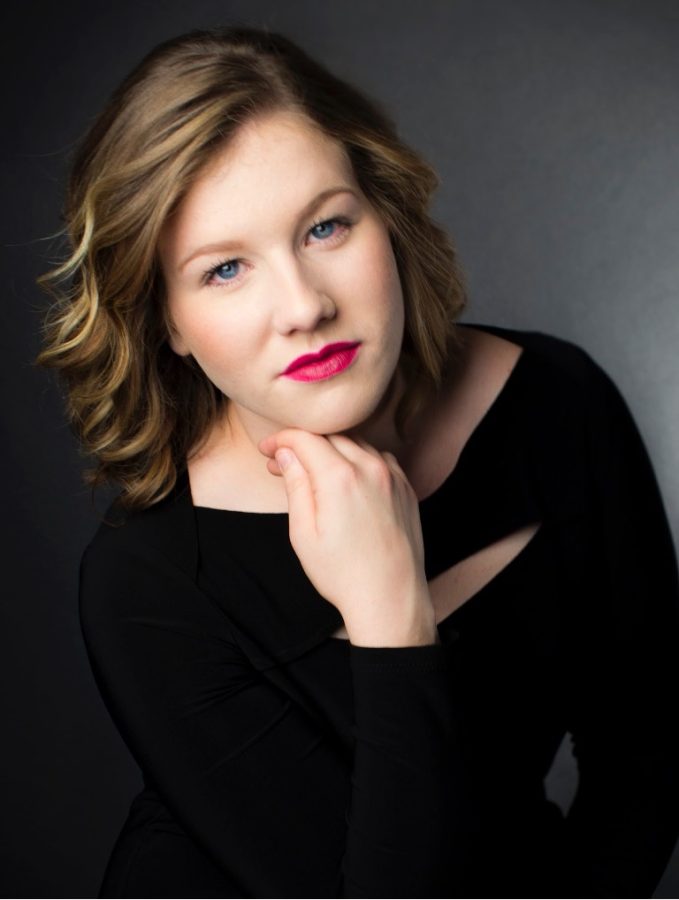 The excitement of setting out on an adventure, the nostalgia of a curious childhood, and the concern of a grieving mother were all stories that fueled the emotions in the Jensen-Noble Recital Hall last Saturday.

On March 5, Alumni Guest Lecturer in Voice Emily Dirks (‘18), accompanied by Assistant Professor of Music Nicholas Shaneyfelt on piano, performed pieces from three different bodies of work for the former’s Faculty Artist Series performance. Selections for the program came from H. Leslie Adams’ The Wider View, Samuel Barber’s Knoxville, Summer of 1915, and Gwyneth Walker’s La Ternura. Dirks intentionally included pieces from a wide range of composers, because celebrating diversity is something she is committed to both on the stage and in the classroom.

“My goal for every one of my students is to have at least one song that is not standard repertoire,” Dirks said. “It showcases someone that’s from a group of people that are marginalized.”

When explaining why each piece was chosen for the performance, Dirks pointed to the emotional connection she has with the music. In discussing The Wider View, Dirks shared what components she identified with.

“The text spoke to me because it tells the story of a person going out on kind of an adventure, and I kind of see my own life in that way, as a person who wants to be an opera singer full-time,” Dirks said. “That’s just kind of a strange career.”

In the summer of 2017, Dirks gained international opera experience by performing as Fiordiligi in Così fan tutte with La Musica Lirica in Novafeltria, Italy. After graduating from Luther in 2018, she earned a master’s degree in Vocal Performance from Louisiana State University (LSU) in 2020.

Beyond her emotional connection to the music, this recital was notable for Dirks in another way. This was her first recital in which she was without the constraints of working towards a degree.

“This is actually the first recital in my life where I’ve been able to just program stuff that purely I’ve wanted to do with no requirement whatsoever,” Dirks said. “I’m just choosing music and sharing it with people.”

In her time since leaving Luther, Dirks has drafted a substantial resume. She sang Musetta in La Bohème with Opera in the Ozarks, was the title role in Poulenc’s Les Mamelles de Tirésias with the Turner-Fischer Center for Opera at Louisiana State University, and performed the role of Krysia in Jake Heggie’s Out of Darkness: Two Remain with LSU Opera. The latter production won first place in the National Opera Association scenes competition in 2019. Immediately following her time at LSU, Dirks moved back to Iowa in the early months of the COVID-19 pandemic to prepare for her position as Alumni Guest Lecturer in Voice.

“As long as I’ve wanted to perform, I really loved teaching too, and I’ve always been really interested in it,” Dirks said. “I actually got the idea that I would want to apply for this job when I was a student [at Luther].”

Cirdan Klindworth (‘24) is a student currently studying voice with Dirks. When reflecting on what he’s gained during their time working together, Klindworth discussed the vocal tone he’s developed.

“I think the biggest thing that [Dirks] has taught me is just how to sing with a more sophisticated tone,” Klindworth said. “I’d say she’s definitely taught me a decent amount of compassion and just a love for music as well.”

For those that don’t study with her, there are still lessons to be learned from Dirks’ performance, as music education major Rachel Meehan (‘25) shared. She attended the recital, and was struck by the connection she felt to Dirks as an audience member.

“She has this ability to convey this story to the audience. You’re just immediately drawn in when you listen to her and when you watch her perform,” Meehan said. “She has just an incredible capability to connect with the audience.”