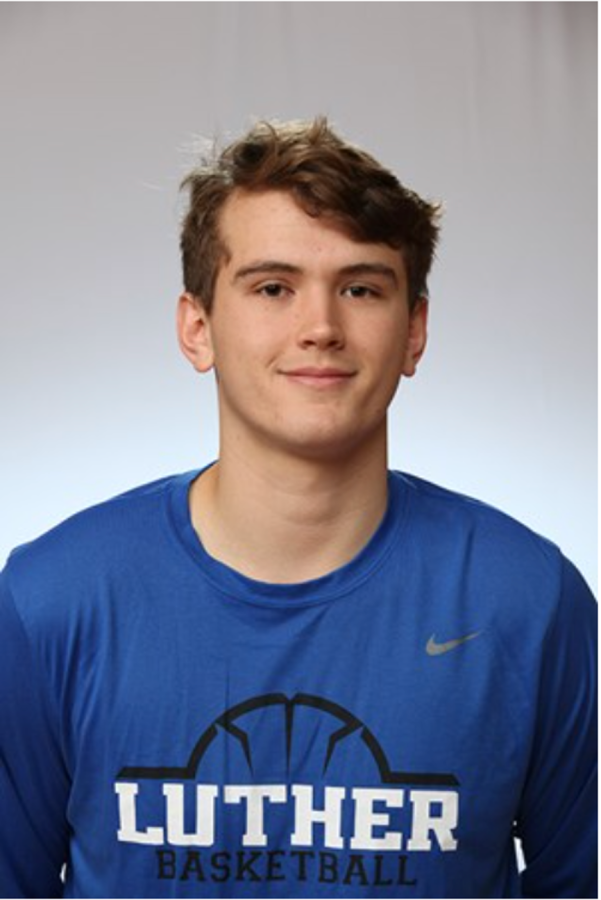 Ben Gill (‘24) has been selected as this week’s Norse of the Week. Gill is a center on the men’s basketball team and was recently awarded second-team all-conference for the first time. He finished the 2021-2022 season leading Luther in scoring (272 points total this season), rebounding (146 rebounds), and shooting percentage (56.7%). He averaged 10.6 points per game, ranking him twentieth in the conference, 5.9 rebounds per game, ranking him eighth, and shot with an accuracy of 54.6% (77-141), ranking him seventh. This is Gill’s second year playing for Luther, and he plans to continue helping his team’s performance in the coming seasons.

How long have you been playing basketball?

I didn’t properly start playing until I was 11. Before then, I played rugby, and I basically was playing [basketball] around with my friends and stuff and [eventually] I was like, ‘I’ll go try out for the club team’. That’s where it really started.

What made you decide to commit to pursuing basketball, especially in college?

Before I settled down back home in Australia, I wanted to go to other places, see different places in the world, and basketball was the easiest avenue for me to do that. I was really fortunate that I could use basketball as an opportunity to experience America and all that it has to offer. I’ve used basketball to come to America to put myself in uncomfortable situations to try to grow as a person.

What were your expectations going into this season?

I’d say we were very hopeful going into the season, because we were a very young team. We only had one senior, three juniors, and the rest of us were sophomores. So, we had a lot of stuff that we needed to build on because we are all new to college basketball. I would say we were all optimistic for the season. I think from the beginning to where we ended, there was a lot of progress. We’re happy that we as a unit have a couple more years together.

Personally, how do you feel about your performance this season?

I mean, there are always things that you can improve on. I feel like I improved a lot from last year to this year, and that I’ll keep trying to improve for the team and get better. I’m relatively proud of how I performed, but it’s not an individual game, so I’ll keep trying to do what the team needs me to do.

What were your personal goals for this season and did you feel that you met them?

I didn’t have many personal goals going in this season, more [group-oriented] goals. I would say my personal goals were to be a bit more dominant inside, and be able to finish close to the basket. But those were overshadowed because, to me, the main goal for us was to come together [as] a bunch of people who have never played [together] and build chemistry. That was the main thing that I was hoping that we’d be able to do, considering none of us had played before. Even us sophomores, we hadn’t even played a full season yet because of COVID. So to say, did we achieve that? I would say we got there, but there is still a long way to go.

What is your favorite memory from this season, and why?

Beating Wartburg here [at Luther] is definitely the highlight of the year, because of the tremendous support we got in that game. Lots of people showed up and it was really, really good. Without [the crowd], it would have been really tough, they really lifted the energy of the team. Winning that game, considering that no one really expected us to do it, was definitely the highlight of the year.

Why do you enjoy playing basketball for Luther? Are there any specific reasons?

I love playing basketball because of the team aspect of it, and at Luther I feel like the basketball community is very tight-knit. We do everything together. I’ve made the best friends that I’ve basically ever had on the basketball team. We do everything together, and that sort of community is definitely my favorite part of it. I also love playing basketball. I love working together with people to try to achieve a common goal. I think that’s a really underrated skill in society today, to just be able to put your individual aspects aside to try to work, to get to something greater. And that’s what basketball is to me.

How do you prepare for a game?

Individually, I normally eat like two and a half or three hours before. If it’s an away game, we normally go eat out somewhere. Then we watch the girls and then at halftime we go into the locker room and I listen to a bit of music before the games and then come out, take my music off, listen to the pre-game talk and then warm up.

What is the best advice you have for an aspiring college athlete?

Probably stick with it. Especially if you’re coming into it as a freshman, there’s a lot of challenges going from high school to this, a lot of adversities about where your mindset is. A lot of the time, you come in looking like an individual with lots of personal goals and stuff, but you have to put that aside. You need to try to do what’s best for the team, try to get your ego out of the way, because that’s the main thing that I see people who struggle with coming into these sorts of things.

I’m going to have to go for a cliché one. There’s this player, an Australian basketball player. He’s kind of a niche basketball player, called Bogut. Andrew Bogut. He was an Australian player, and he was a center. He was like the first big Australian name in the NBA who got drafted in the early 2000s, I think. He sort of made basketball really big in Australia. Before then, it wasn’t as big. That’s sort of the guy who I’ve always loved watching, he won everything in the NBA and he didn’t win it being a superstar or whatever. Even though he was a very talented guy, he did it [by] being a humble guy who would do what was necessary for people to win.

Is there anything else you’d like to communicate to the Luther community?

I mean, I’d just like to thank everyone for the support this year – for sticking with us, even though sometimes the times were hard. But, definitely, all the people, especially the sports communities, made it a lot easier for us [by] coming to home games and supporting, so I’d like to thank them.