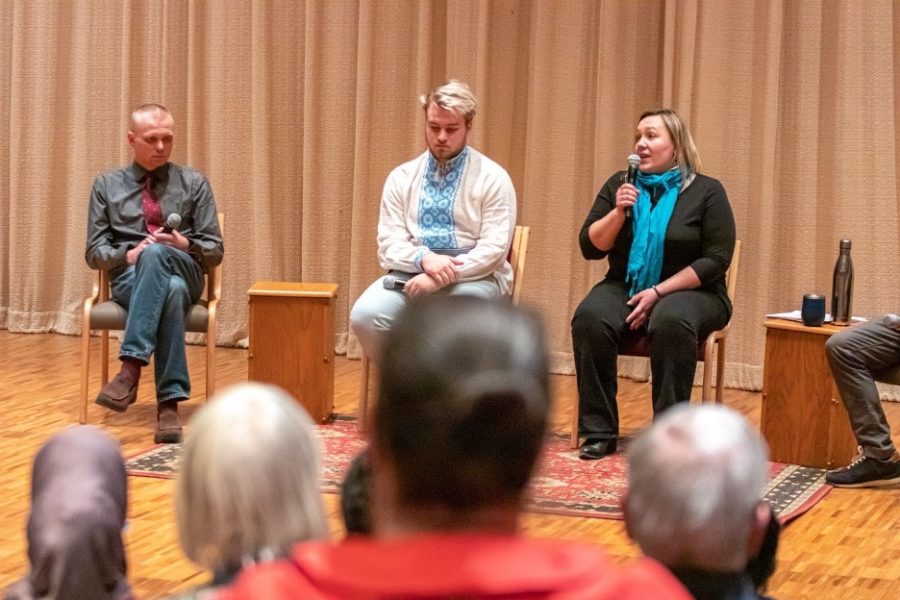 When asked about the ongoing Russian invasion of Ukraine, Associate Professor of Anthropology Maryna Bazylevych summarzied her thoughts in one phrase.

“It is the worst thing that has ever happened to me,” Bazylevych said. ““I don’t know a single person who is not helping the war effort in Ukraine. It came from the mouths of my friends that they would rather die than allow this to happen in Ukraine.”

Bazyleych, along with Associate Professor of Computer Science Roman Yasinovskyy and student Sasha Tomasevich (‘24), spoke about their connections to Ukraine and how the recent invasion of the country has affected them during a pop-up panel discussion on Tuesday, March 8. “Tell Me About Ukraine”, a pop-up panel hosted by the Center for Ethics and Public Engagement (CEPE), highlighted Ukrainian voices of students and faculty on campus. The discussion began with each participant sharing their thoughts, and then ended with a question and answer session.

Bazylevych was born in Ukraine, but came to the United States when she was twenty years old. Her parents and sister still live in Ukraine, along with many of her friends. She travels back to Ukraine once or twice a year, but was not able to go this past January because of the political tension in the country.

“I feel like there is this misunderstanding that this war is a disagreement where Russia and Ukraine disagree about something,” Bazylevych said. “That’s not the case, that’s not what this war is. Ukraine did not provoke Russia. Ukraine constitutes no threat to Russia. It is a very direct and brutal attempt to take Ukraine.”

Bazylevych wanted people to understand how Russia’s invasion of Ukraine may affect other countries around the world. She acknowledged during the panel that Ukraine is not isolated from the rest of the world, and Russia has the means and opportunity to move further than Ukraine.

“I want people to think about what else Putin can do if he is not stopped,” Bazylevych said. “There are all sorts of rumors out there, but he is very skillful at using information as a weapon. He manipulates information, revises history, or invents some things. He can do a lot of damage just by doing that.”

Tomasevich has a similar connection to Ukraine. Even though they were born in the United States, their parents are both Ukrainian and immigrated to the United States in the 1990s, and they still have many relatives in Ukraine.

“There are a lot of people in Ukraine who care about keeping it Ukraine,” Tomasevich said. “Ukraine is a free, independent country that deserves to stay a country. They earned their independence in 1991, and they would like to keep it.”

Ghazal Alabtah (‘23) attended the event to hear different opinions and learn more about the situation in Ukraine. Alabtah believes in prioritizing Ukrainian voices when having discussions about this conflict.

“It is important to talk to people who are directly facing the issue that is happening, instead of just having conversations with [someone who isn’t directly connected] to the conflict,” Alabtah said. “If they have questions, they should talk to someone who is experiencing [and who] understands, instead of assuming another person has to tell them everything.”

Russia’s invasion of Ukraine is very personal for Bazylevych because of her strong connections to the country. She wanted people to feel personally attacked by the invasion and worry about the future of Putin’s military operations. Bazylevych also acknowledged her connections to Ukrainians who remained in the country and chose to fight back.

“I don’t know a single person who is not helping the war effort in Ukraine,” Bazylevych said. “It came from the mouths of my friends that they would rather die than allow this to happen in Ukraine.”

The “Tell me about Ukraine” panel discussion can be replayed in full via Luther’s official YouTube channel. The next CEPE event will be on Wednesday, March 30 at 7 p.m., when Luther alum Manaswini Ramkumar (‘10) lectures on “Military Dilemma with Undemocratic Leaders”. The lecture will be held in the CFL recital hall.