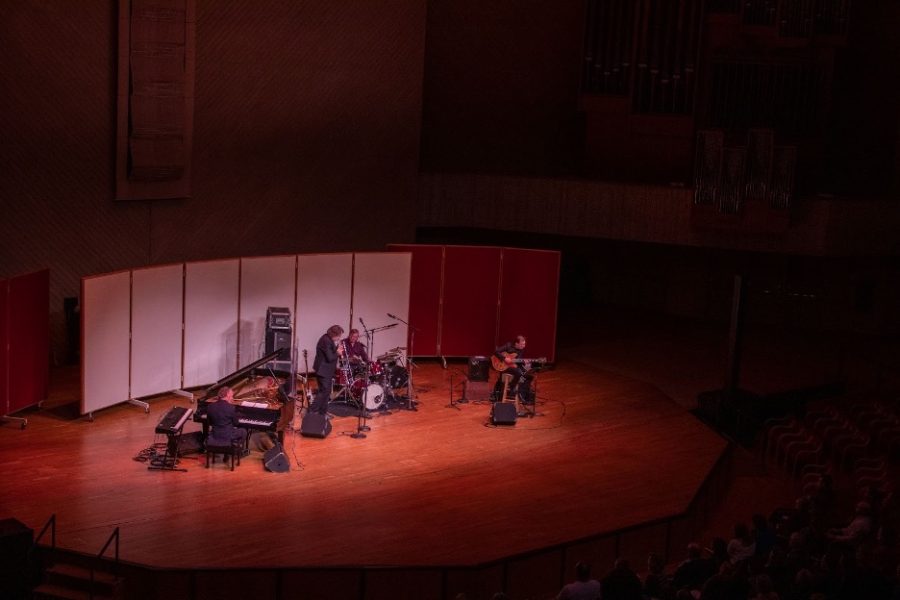 Heads bopped and feet tapped as the crowd gathered in the Center for Faith and Life’s Main Hall to witness the continuation of a Luther legacy.

On April 1, the Brubeck Brothers Quartet closed out the 2021-2022 Center Stage Series. The band consists of brothers Chris and Dan Brubeck, the sons of jazz luminary Dave Brubeck, as well as Mike DeMicco on guitar and Chuck Lamb on piano. During the 90 minute set, Chris Brubeck switched off between the bass and trombone while Dan Brubeck played the drums. The set featured many of Dave Brubeck’s classic pieces, such as “Kathy’s Waltz” (1959) and “Time Out” (1959). This performance was originally set for 2020 to celebrate Dave Brubeck’s (1920-2012) Centennial, but was pushed back due to the COVID-19 pandemic.

The Quartet’s style is rooted in “straight-ahead” jazz, but they incorporated odd time signatures, funk, blues, and world music throughout the performance. Like many jazz musicians, they didn’t stick to a script, opting instead to adopt more of an improvisational approach. For example, in the latter half of the set, they featured Lamb’s piano skills in an entirely extemporized piece. Chris Brubeck also treated the audience to anecdotes about his father and siblings, as well as explanations of the origins of certain songs and rhythms. Dan Brubeck points to the specific influence his father has had on his music.

“He shaped everything, because I grew up listening to his music and hearing him play with his bands and all that stuff,” Dan Brubeck said. “That had a big part of how I grew up playing music, which was more abnormal compared to most people.”

The group’s musical talent and knowledge was not limited to the Center Stage Series, however. The Brubeck Brothers Quartet also held a clinic with Luther’s own Jazz Orchestra before the performance. Performing Arts Committee (PAC) President Kristin Flathers (‘22) explained how the experience isn’t just a special occasion for ensemble members, but a career opportunity as well.

“To have another jazz ensemble come to us is really great because we get the chance to look at what a professional jazz group looks like,” Flathers said. “Especially being involved in Jazz Orchestra and everything, [students] get that chance to go ‘oh my goodness, this is what it could be like when I become a professional in the music industry.’”

Being one of Luther’s four touring ensembles, the Luther College Jazz Orchestra is known for its liveliness and musical energy, as well as being one of the premier collegiate instrumental ensembles in the United States. Such a reputation wasn’t lost on the Quartet, as Dan Brubeck shared some kind words for the ensemble after working with them at the clinic.

“We were all really impressed,” Dan Brubeck said. “Often you go to hear college kids playing, and you’re like, ‘Oh my God.’ Sometimes it’s like they really know nothing about jazz, but everyone was way beyond the level that is sometimes normal.”

“I think it’s really fun that they’re here, because they kind of have a little bit of a legacy,” Langholz said. “We were looking at old yearbooks, and they’ve been here one other time prior. Then their dad, who is also a big jazz performer, came twice before they were a group.”

Dave Brubeck first performed at Luther in 1956. The Kappa Phi fraternity brought his group back in 1962 for Jazz-in-the-Round. In between the two performances, Dave Brubeck embarked on his famous 1958 State Department tour, which was the focus of the Brubeck Brothers Quartet’s latest album, TimeLine (2018).

Although the Brubeck Brothers Quartet closed out the 2021-2022 Center Stage Series, the Okee Dokee Brothers are set to perform a family concert on Saturday, April 23, at 2 p.m. Tickets are on sale now. The announcement of the 2022-2023 Center Stage Series will be coming in May.