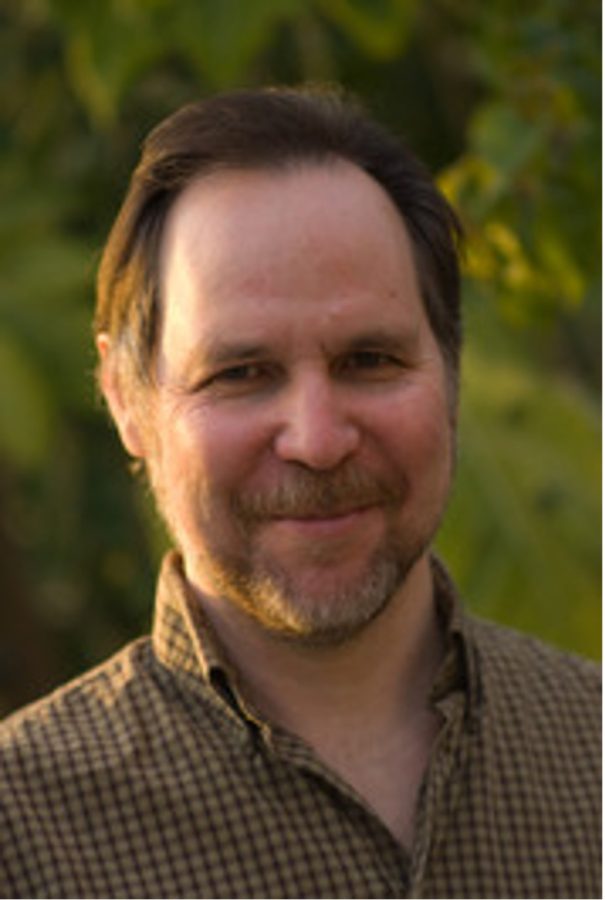 Andy Douglas, author of Redemption Songs: A Year in the Life of a Community Prison Choir and The Curve of the World: Into the Spiritual Heart of Yoga. Photo courtesy of Andy Douglas.

At 7 p.m. Thursday, March 31, author Andy Douglas stood in the Center For Faith and Life, and read from his most recent book, Redemption Songs: A Year in the Life of a Community Prison Choir. The book details Douglas’ experience as a volunteer member of the Oakdale Community Choir at the Iowa Medical and Classification Center Correctional Facility (IMCC) in Coralville, Iowa.

IMCC is a prison that houses up to 900 male inmates under medium-security, and allows for inmates to participate in groups, like community choirs, while they undergo processing and classification, before being sent to their more permanent prison locations. Every Tuesday afternoon for seven years, Douglas ventured into the halls of IMCC to participate in the Oakdale Community Choir, consisting of approximately 30 “insiders,” or men currently incarcerated, and 30 “outsiders,” non-incarcerated men and women like Douglas.

“I had a little bit of trepidation early on, having some of the stereotypical assumptions that people have about prisons, so it was a little scary going in,” Douglas said. “But pretty quickly, the atmosphere and the choir room [felt] so supportive…In general, just getting to know these men, I became very comfortable and interested in wanting to learn more about their lives and about prison in general.”

Douglas’ short lived fears transformed into a longing to know and understand those he sang with. During his years with the choir, he learned a lot about the American justice system and the harsh realities faced by those behind bars. This newfound understanding is what led Douglas to write Redemption Songs, hoping to introduce others to these realities through his own experiences.

Douglas began the event by leading the audience in singing “Lead With Love” by Melanie DeMore, one of the songs that was commonly utilized as a warm-up during his time with the Oakdale Community Choir. As the audience was composed predominantly of singers from the Decorah and Luther communities, there were many in attendance willing to participate.

“[This event] reminded me of how important it is to sing for and with people, which is something that I love to do,” Luther alumna Liz Rog (‘81) said. “[Participating] kind of renewed my passion for that.”

Following the singing, Douglas read several excerpts from his book, ranging from his average week-to-week experience participating in the choir, to more data-based information surrounding the criminal justice system in the United States. Douglas’ anecdotes, detailed through the passages he read to the audience, provided insight into the way in which art and music help offer second chances to those who have been incarcerated.

“There’s a lot of stuff going on when it comes to the criminal justice system, and then there’s the human element, which I became involved with by sitting next to these guys once a week,” Douglas said. “At its heart, the book is about music, about creativity, and about creating community around that creativity, so I think it could speak to people who have an interest in music and the different ways that music transforms lives and creates community.”

After reading excerpts from his book, Douglas gave the floor to the audience for questions. This sparked a conversation between the author and those in attendance on more specific aspects of his experiences, and on the themes throughout Douglas’ book.

“There was kind of a community feel, and I like that it was more of a discussion towards the end,” Nora Weigle (‘22) said. “People were sharing ideas rather than just raising hands and asking questions. It felt like more of the goal of the work that [Douglas] seems to have been doing.”

In writing Redemption Songs, Douglas hopes to enlighten people to the inherent and systemic injustices of the criminal justice system in the United States, as well as to the rehabilitative and connective power of music. Coming to the Luther campus and engaging in open discussion on such topics is one of many ways Douglas hopes to introduce these ideas to those who may not generally think about these things.

“[Most people] don’t have a good understanding of the sentencing system, the racism, and the problems inmates face after they’re released,” Douglas said. “Many Americans may simply not think about people in prison at all. I see [the incarcerated] as human beings who are struggling, as any of us are, to become better people. If I can persuade people to open their minds to that possibility, and think a little more about how we as a society structure our prison system and how we perceive people who’ve committed crimes, then I think I’d be happy with that.”

For those interested in learning more about or purchasing Redemption Songs: A Year in the Life of a Community Prison Choir, more information can be found here.