Stitch Their Names: Quilts of Remembrance 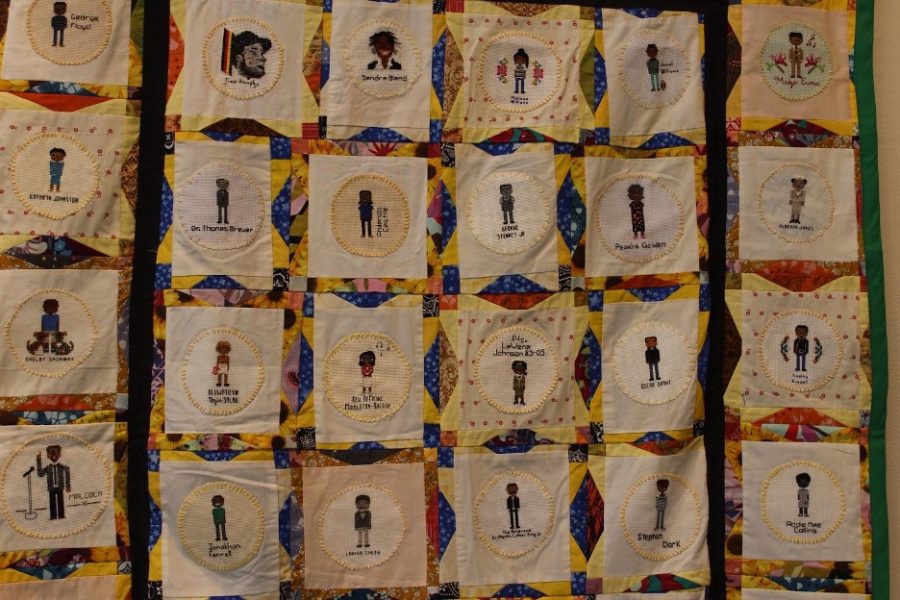 Over spring break, the Stitch Their Names Memorial Project was put on display on the Gregerson Gallery Wall in the Center for the Arts, and will remain there until the end of April. The project features two large quilts displaying the names and portraits of 116 Black individuals who were killed in racially motivated attacks throughout American history. Nearly 100 volunteers from across the country helped to cross-stitch the names and portraits, and put the quilts together.

Each volunteer participating in the project received biographies of the people they were assigned to stitch, as well as the dimensions they had to work with. Other than these guidelines, artists like Luther alumna and C-Store Manager Nori Hadley (’97) were allowed to create their own interpretations of the portraits, depicting them in different shades and tones, pictured next to animals or objects, or incorporating other unique elements that the artists thought fit their story.

“When you look at the quilts, you see that people interpreted things in many different ways,” Hadley said. “Some are close-up portraits, some are farther away. [The project organizer] gave me a size requirement, but other than that she said [to] just do what [I] like.”

Hadley first heard about the project from a friend. After reaching out to organizer and crafter Holli Johannes, Hadley agreed to stitch two portraits for the quilts, and received the biographies of James Chaney and Keaton Otis. James Chaney was a civil rights activist who was wrongfully jailed and then killed by members of the Ku Klux Klan in 1964. He was honored with a Presidential Medal of Freedom in 2014. Keaton Otis was shot 23 times by police officers following a traffic stop in 2010. More on these victims and others can be found in the biographies next to the quilts in the CFA, as well as on the project’s website.

Before its stay at Luther College, the Stitch Their Names project traveled all over the country, with the goal of honoring those individuals killed by racial violence. The quilts have been displayed in multiple cities throughout South Carolina, in Jackson, Mississippi, and most recently made their way to Atlantic City, New Jersey. After their time here at Luther, the quilts will go to Hadley, who plans to display them in downtown Decorah.

As the Luther community returns to campus after break, students and staff around the CFA are getting to see the project for the first time. Ellie Palashewski (’22), a social work major, reflected on how the project gave her similar feelings to the Hostile Terrain 94 exhibit, located in the gallery in the Dahl Centennial Union.

Since it is not an incredibly well known project, many on the Luther campus are just learning about the Stitch Their Names project as they see it on display. Neither Palashewski or Abigail Miller (’22) had heard of the project before, but both students agree that the quilts have a meaningful impact.

“This is my first time hearing about [the project], but I think it’s great,” Miller said. “Visually, it’s really pretty, and it’s meaningful in and of itself. I think that it should be talked about more.”

The volunteers from the project had conversations about where in the country the project should be displayed. In the end, the quilts were displayed in a number of different locations. When the project was open in April, Hadley had the idea of displaying it here at Luther College. By bringing the quilts to the Luther campus and the greater Decorah community, Hadley hopes that the project will inspire discussion amongst the community on topics such as racial violence and the people affected by it.

“I reached out, not because I wanted to have the quilts here, but [because] Luther has always done a great job, both when I was a student, and now as a community member, of hosting things that promote community dialogue [and] community outreach,” Hadley said. “Each one of these people was important, and their lives were cut very short, simply by virtue of the color of their skin. I hope that [the project] gets people talking about that.”