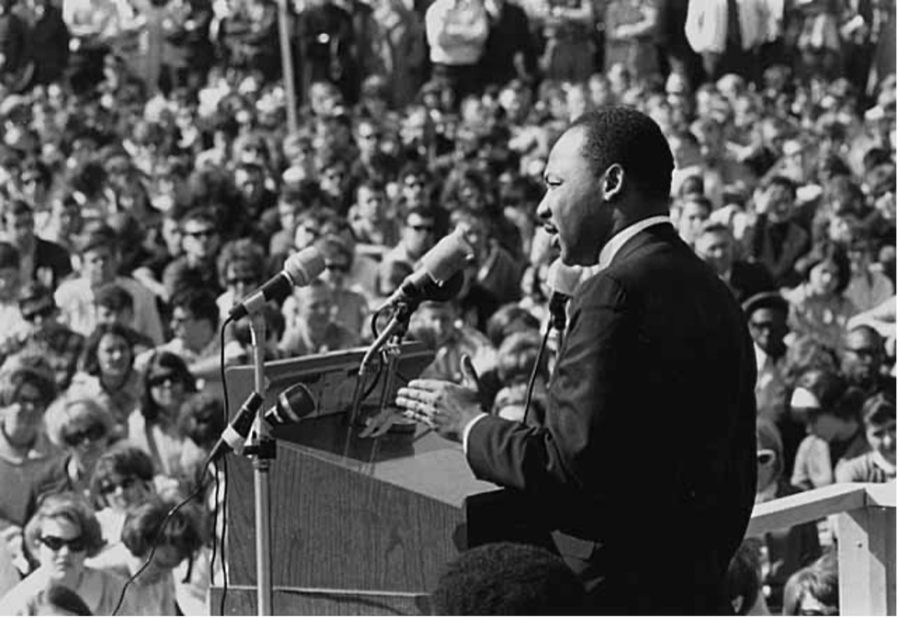 Dr. Martin Luther King Jr. speaks during an anti-Vietnam war rally at the University of Minnesota in 1967. King denounced the Vietnam war many times, including in his famous speech “Beyond Vietnam: A Time to Break Silence” which was presented at Luther on April 4. (Photo courtesy of Minnesota Historical Society)

April 4 marked an enduring date in the legacy of the American Civil Rights Movement. It heralds the anniversary of the devastating assasination of Dr. Martin Luther King Jr. in 1968, but also the date of one of his most groundbreaking speeches just a year prior. Originally given in New York City’s Riverside Church, Dr. King’s “Beyond Vietnam: A Time to Break Silence ” was read aloud on its 55th anniversary in Dahl Centennial Union on Monday, April 4, 2022.

The public reading was organized through the Northeast Iowa Peace & Justice Center and Luther College’s Civic Sustainability Initiative. The event, just like other readings of the hour-long speech happening across the country, brought together 16 readers who each presented a portion of the speech. The speech was held in the lobby of the Union, which student speaker and Black Student Union President Phoenix Bradley (‘23) thought presented a great opportunity for King’s words to be heard.

“Presenting this speech on campus, in a space that is this open, is extremely important, and bringing up things that are historical like this can be used to guide us,“ Bradley said. “People in [the Union] can hear [this speech] even if they didn’t come specifically to listen.”

Luther’s speakers varied greatly in background, and included current students, faculty, alumni, and Decorah community members. By reading King’s words, Luther speakers shared his interpretation of the Vietnam War as “an enemy of the poor.” King originally spoke at length of the war’s harmful consequences for not only Vietnamese civilians and US troops on the frontlines, but also for impoverished communities in the American south.

“It was sending their sons and their brothers and their husbands to fight and to die in extraordinarily high proportions relative to the rest of the population,” King said. “We were taking the black young men who had been crippled by our society and sending them eight thousand miles away to guarantee liberties in Southeast Asia which they had not found in southwest Georgia and East Harlem.”

Among the 16 speakers was Dean of Student Engagement, Ashley Benson, who emphasized how important events like this reading draw the Luther and Decorah communities together.

“We are bridging community experiences, and it shows that people are not monoliths,” Benson said. “We have many different sides, and they all speak to us. It’s situations like this that help us to be informed about what’s impacting our community and helps to educate us. It allows us to continue to grow in our knowledge and experiences.”

Northeast Iowa Peace & Justice Center Director Sharlene Bohr introduced the speech not only as a historical document, but also emphasized the applicability of Dr. King’s words to current events. The 55th anniversary of the speech comes at a time in which Americans have watched another major conflict unfold: the Russian invasion of Ukraine.

“Every year on April 4, this particular speech is presented,” Bohr said. “It originally spoke to the rise in militarism, racism and extreme materialism, which is all still here today, when it was given in 1967. Even now, we can switch out the war in Vietnam with the war in Ukraine, so the words of Dr. King feel particularly meaningful in 2022.”

A recording from the event’s live-stream is available courtesy of the Civic Sustainability Initiative and can be found on their YouTube page. A full transcript of “Beyond Vietnam: A Time to Break Silence” can be found online at americanrhetoric.com.