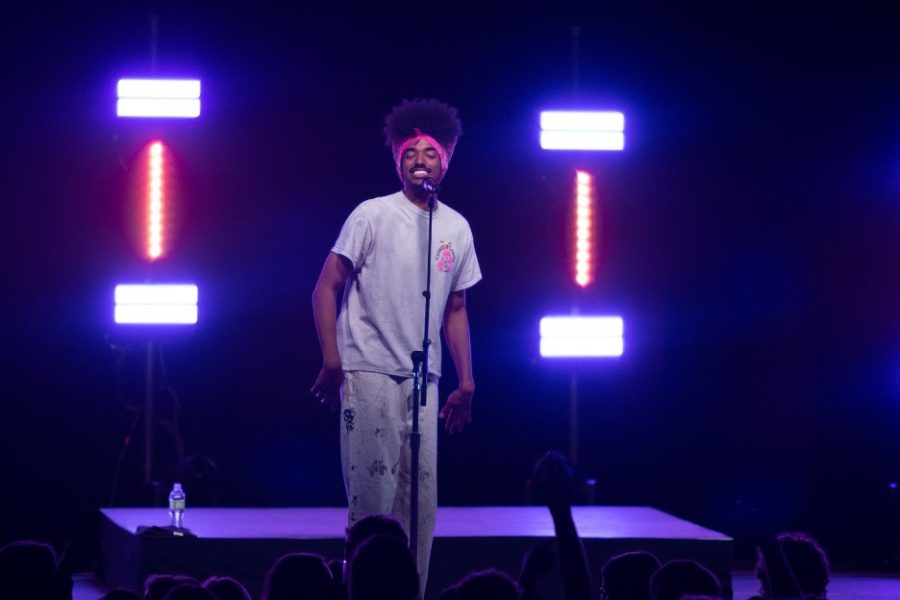 If it was your last day on earth, would you spend it stuck in the middle of a crowded Regents Center, waiting in anticipation for the Luther headlining performer of the spring semester? While the stakes were not quite that high on Saturday night, more than 600 Luther students and Decorah area community members filled Regents to see singer and TikTok sensation Tai Verdes in concert.

The Tai Verdes concert held on April 2 was part of Verdes’ “HDTV Tour,” which is promoting his debut album TV. Luther was part of the first leg of the tour, where the band is visiting colleges across the nation. A concert on April 19 in Santa Ana, California, starts their headline tour, and they finish with a short international leg, where the band will play in Canada, France, and the United Kingdom.

“I’m gonna be a problem,” Verdes said in promotional material prior to the event. “I love everything that’s happening. But this is not a one song thing, this is a 10-album thing.”

After being rejected from American Idol and The Voice, Verdes won $50 thousand on MTV’s Are You the One? He used this money to fund his music career while working a 9-to-5 job as a Verizon employee in Los Angeles. After a video of him singing “Stuck in the Middle” went viral on TikTok, he decided to quit his job and pursue music full time. His music is now rapidly growing in popularity on Spotify and Apple Music, with songs “A-O-K” and “DRUGS” on his album, TV. Verdes currently has nine million monthly listeners, and almost 200 million plays on his hit song “A-O-K.”

Erin Keller (‘22) is the President of the Student Activities Council (SAC) and the current Chair of SAC Concerts, the organization in charge of planning concerts on campus. Keller spoke about the long road they took selecting and preparing for Verdes to perform at Luther.

“First, we kind of get a feel for what different students are listening to, and what we think they would want, by asking people on the Concerts Committee,” Keller said. “We also have an agent, and he works with a company called Event Resources Presents. He has a list of what artists are popular at the time, and he knows the cost for all the artists. Then, we compile a list and compare it to the students list. That is when we put a poll out to the student body so they can vote.”

After the results from the student poll are received, the Concerts Committee decides who they want to perform at Luther, and work out logistical matters such as when the artist will perform and what they will need while performing. Verdes was chosen because of his rising popularity, in addition to his tour dates fitting well into Luther’s availability.

“Tai is on the rise in popularity,” Keller said. “He grew in popularity on TikTok, and there are a lot of students who have TikTok. He is a younger artist, and his music appeals to a lot of people because it can fall into the pop genre, but it can also fall into some other genres. He is a good person who checks boxes.”

Verdes sang with a backing band consisting of lead guitar, bass, and drums. After the concert, bassist Edison Lo reflected on his time touring with Verdes. Lo met Verdes after a livestream event they played together, and played with him at Lollapalooza in 2021.

“I have known him for almost a year,” Lo said. “It’s Tai’s first big headline tour, and most of it is sold out. I think the shows are going to be really fun.”

This tour is an opportunity for the band to expand even more and reach a wider audience. Although almost all shows in Verdes’ tour are sold out, Luther students were able to enjoy his set.

Brittney Miranda (‘24) attended the concert with friends because she had heard Verdes’ songs on TikTok and wanted to see him perform live. She described the concert as very high energy, which Verdes encouraged at various points in the evening.

“We have so much adrenaline right now, we are shaking,” Miranda said. “We love Tai Verdes. Period.”