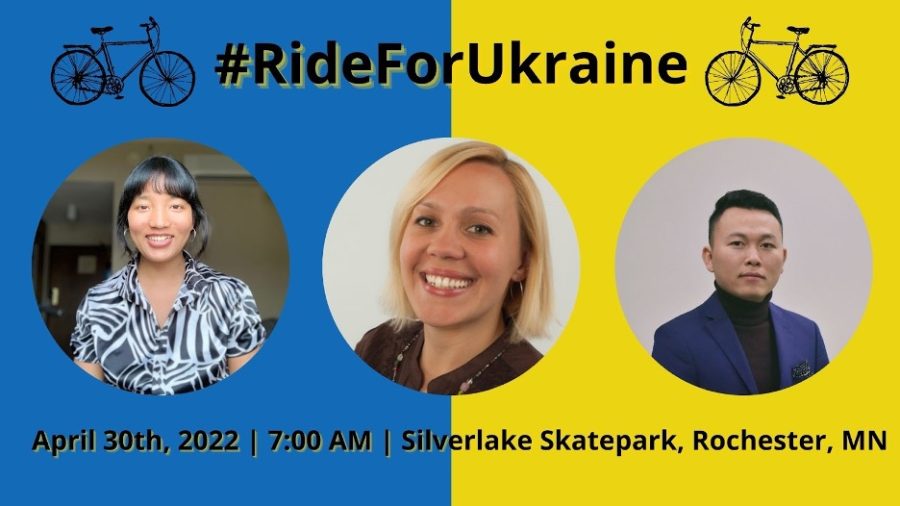 75 miles. How long, really, is 75 miles? It is the total length of Hadrian’s Wall in the United Kingdom. It is just longer than the total length of California’s Interstate 405 highway. One can even achieve a 75 mile trip by walking the full length of the Luther football field 1320 times. But most notably, this is the distance a group of Luther students, faculty, and staff will bike from Rochester to Decorah, with a goal of advocating for peace in Ukraine.

The bike ride, which is scheduled on April 30, will begin at Silver Lake Park in Rochester and pass through various cities on the way back to campus, with the last leg of the ride on the US-52 Highway. Along the way, there will be several opportunities for participants to stop riding and get picked up or to join the group at a starting point other than Rochester. The ride was organized by students Anita Tamang (‘22) and Souksakhone Sengsaisouk (‘23), in collaboration with Associate Professor of Anthropology and Ukraine native, Maryna Bazylevych Nading.

After the start of Russia’s invasion of Ukraine, Tamang converted an idea to ride from Rochester to Decorah for commencement into a way to take action. After Tamang consulted with Nading and Sengsaisouk, the plan to host a bike ride to fundraise for Nading’s hometown and to promote peace in Ukraine was put into action. Tamang’s inspiration for the campaign came after she saw how the war affected those around her — especially Nading, her advisor.

“I felt so helpless, and then I started thinking,” Tamang said. “Me, being me. How could I contribute? My activism is very action-oriented, [so] I wanted to [help] by taking action.”

The aim of this fundraising campaign and bike ride is to advocate for peace in Ukraine and to bring awareness to the ways in which Luther students and community members can help people affected by the current war. All monetary funds raised for this bike ride will be donated to the oncology clinic in Nading’s hometown of Khmelnytskyi, Ukraine. Any funds not used by the clinic will help support the needs of the many Internally Displaced Persons (IDPs) in the area. The clinic is currently inundated with patients who have been forced to flee their homes in eastern Ukraine but still require chemotherapy treatment, as well as many IDPs who require basic healthcare.

“I feel like there is a lot of goodwill [but] not enough resources,” Nading said. “People don’t have money. Some of the IDPs who arrive, they just literally have nothing. Chemo is expensive and supportive therapies are also expensive because people need stuff for nausea, people need stuff for vitamins and kidney function and other things when they’re that sick. Someone needs to help them.”

Sengsaisouk also elaborated on the dilapidated state of the Khmelnytskyi oncology clinic due to the war. The increased number of IDPs passing through Khmelnytskyi – and the many supply chain issues stemming from the war – resulted in a severe deficit in medical supplies that are vital to providing even the most basic health care to patients, leaving the clinic in a dire position.

“It’s not just only having access to basic health care now, it’s worse than that,” Sengsaisouk said. “They don’t even have supplies. They have doctors and all those people in the town, [but] there’s not sufficient resources in order to provide proper health care to the population.”

Sengsaisouk hopes that this bike ride will help advocate for peace in Ukraine. He wants the Luther community to know that any contribution helps, no matter how small. There is currently a GoFundMe for the campaign (donations can be made here), and sign ups to participate in some capacity are still being accepted at this link.

“Any contribution, every single contribution counts for this,” Sengsaisouk said. “Although you might not ride with us, you might support us through snacks [or] water. You might be a supporting crew, you might be a transportation crew. [If] you have one snack bar [and] you want to donate it, that counts.”

Tamang echoed Sengsaisouk’s statement, while also setting a goal that the bike ride fosters a sense of togetherness and a call to action for Luther community members.

“I’m hoping that people will be more aware in the Luther community and also in the Decorah community,” said Tamang. “I hope people will realize why it matters to take action.”