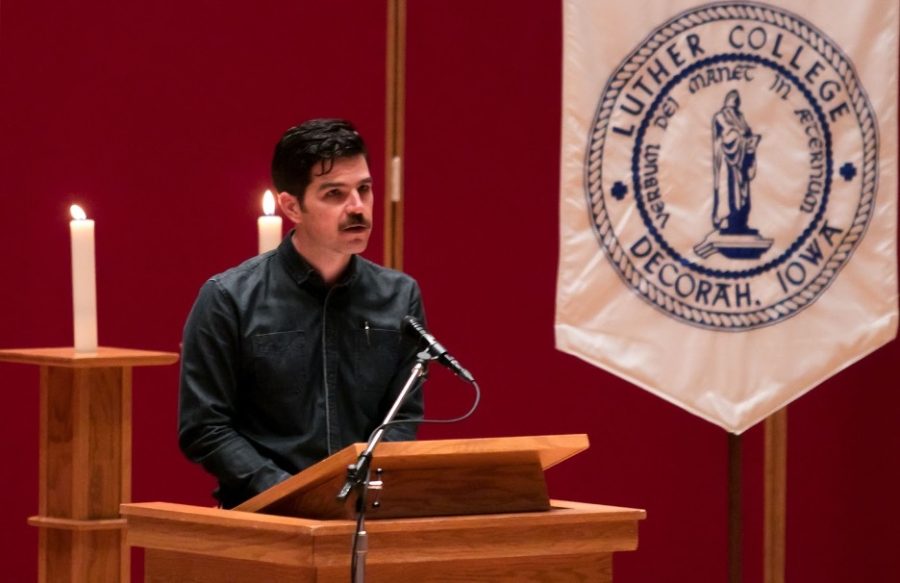 “The man took a moment to look at me in the light. Listen, he said, do you think you could bring us back to Mexico, como hermano? You could drive us down to the border, he pleaded, you could just leave us there, allí en la línea. Like a brother. I sighed and turned my head, squinting at the darkness beyond the church. I have to bring you in, I told him. It’s my job. The man took a deep breath and nodded and then climbed into the back of the transport van, holding out his arms to help his pregnant wife.” – Excerpt from The Line Becomes a River by Francisco Cantú

The Paideia Program recently announced that “The Line Becomes a River: Dispatches from the Border” by Francisco Cantú will be the 2022 all-college summer read. It will be the first reading assignment for next fall’s Paideia 111 course; Cantú will also hold an in-person question and answer session on Wednesday, August 31, and will present at Luther’s 2023 convocation address on Thursday, September 1.

This is not the first time Cantú’s book has been featured in the Paideia program, as the text was first promoted during the all-college summer read of 2019. Cantú also presented at the 2019 convocation address. According to Paideia Program Director Professor Kathy Reed, while it is not typical for the program to repeat summer reads, “The Line Becomes a River” felt like the right book for the Paideia syllabus.

“Cantú was a compelling speaker when we heard him in 2019, and he was extraordinarily generous and genuine in his interactions with students,” Reed said. “He is excited to return to Luther and to share his developing perspectives and new experiences since leaving the Border Patrol.”

Published in 2019, “The Line Becomes a River” details Cantú’s experiences employed as an United States Border Patrol officer. Cantú writes about his efforts to better understand the hard realities present along the Mexico/U.S. border, and his decision to leave the patrol in favor of civilian life. During his visit to Luther, Cantú will speak about how his life has been impacted since serving on the Border Patrol 10 years ago.

Grace Prokosch (‘23) was present at the 2019 convocation where Cantú spoke. She spoke of the major impact Cantú’s address had on her and how it made her more aware of what life was like near the border.

“[Cantú’s address] was eye-opening to additional struggles that were not present in the news at that time,” Prokosch said. “[It] added proximity to an issue [that seemed very far] away.”

Professor Emerita of Anthropology Lori Stanley was very excited to hear that the planning committee for Paideia proposed “The Line Becomes a River” again for 2022. She noted that not a lot of time is devoted to summer reads, and she had wanted more time to discuss Cantú’s book in class three years ago.

“[The book features] voices of people from different races, ethnicities, genders, ages and socioeconomic backgrounds, and so we both hear their voices and then we get a chance to experience how people try to communicate and connect across differences,” Stanley said. “I think [students] enjoyed it, found it accessible, but also really thought provoking. For me it’s just a really important and powerful book.”

In planning the Cantú unit for next fall, Reed explained that it will be expanded from previous iterations. Specifically, the unit will feature “Antigone Gonzalez,” a prose poem in Spanish and English by Mexican author Sara Uribe about a young woman who seeks the body of her brother in the borderlands. A review of Cantú’s book, “Whose voice should be heard?” by Simon Romero, will also be read and discussed. Reed credited outside input received from Luther students and faculty in helping to enhance the unit and add more depth.

“I should thank [Evelyn Montoya (‘23)] for sharing ideas from a J-term project that she worked on with [Spanish Professor] David Thompson,” Reed said. “She evaluated multiple texts by Latinx authors for their potential as Paideia texts, and her work helped influence our decision in finding a text to pair with the Cantú.”

Additionally, Hostile Terrain 94, a project sponsored and organized by the Undocumented Migration Project, will remain on campus through the fall, allowing the 2022 Paideia 111 students to explore and connect the exhibit to Cantú’s writing. Reed acknowledged the powerful impact Hostile Terrain 94 can create in combination with “The Line Becomes a River” to promote thoughtful discussion.

“When [Hostile Terrain 94] was vandalized last fall, we were grateful to be reading a text that gave us a structure for extended conversation about experiences of Latinx migrants at the U.S.-Mexico border,” Reed said. “That worked together with the exhibit to help humanize and individualize those who have died crossing; it needed [to be talked] about.”

Stanley believes that Cantú’s writing will resonate with Luther students for a number of reasons. She gave the example of how Cantú joined the Border Patrol directly out of college, and is now trying to “apply what he learned” after finishing his college education.

“[Cantú is] pretty open about his journey and the twists and turns and the mistakes that perhaps he made along the way,” Stanley said. “In many ways, it’s very suitable for a college audience.”

Courtesy of the Paideia Program, the book will be mailed to first-year and transfer students in June. For anyone interested in “The Line Becomes a River”, copies will be available in the Book Shop this summer.