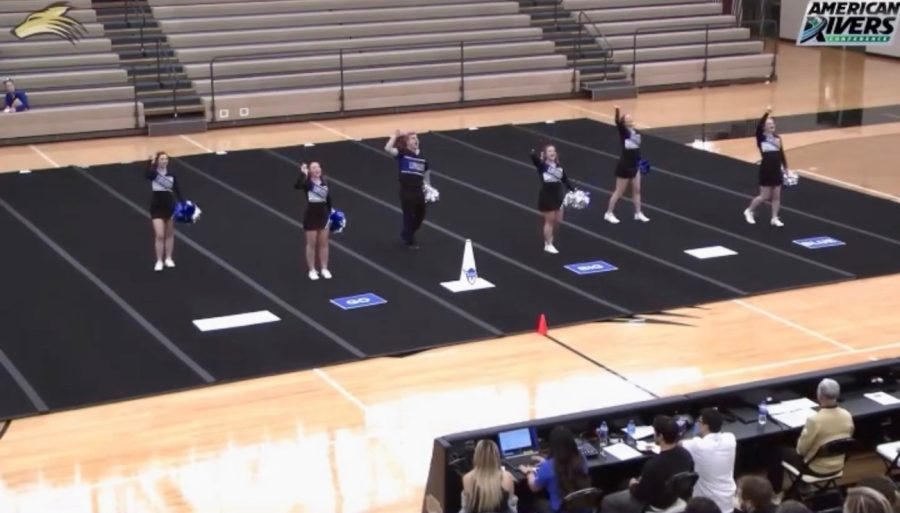 When those in the home stands are looking sullen, frustrated that their team is losing, and beginning to dwindle in spirit, the Luther Cheerleading team steps up. Always there to help support Luther athletes by reinvigorating the home crowd and pumping up the team, Luther Cheerleading is an important part of the football game experience for many fans. But this year, the team took it to another level by heading to their first ever competition and bringing home third place.

Luther Cheerleading is a group of approximately fifteen individuals involved in various fields of study, led by head coach Maria Morales (‘20). Morales, who also serves as the head coach for Luther’s dance team and as Luther’s Admissions Event Coordinator, works with the team on developing their cheering, stunting, and overall athleticism, as well as being a mentor for them as individuals.

“Having the opportunity to be that resource of how to properly do skills has been really rewarding,” Morales said. “Seeing everyone doing not just cheer, but being involved on campus in other ways, has also been awesome to see.”

Currently, the team cheers for Luther’s football games, and just attended their first ever ARC conference competition this year. They took third place in the “game day” category, which encompasses all the aspects of traditional cheerleading, including leading the crowd and properly executing game day technical skills. The team’s high placement left many members shocked.

“We were so proud of ourselves,” stunting base Kaija Rice (‘25) said. “This was the first time that Luther actually competed at this competition, so to get a third place score for our first time competing was one of the most incredible feelings ever. We were just so unbelievably proud of ourselves, because we really walked into it not knowing how it was going to turn out.”

Luther Cheerleading’s third place finish at this competition has inspired the team to explore the possibility of future cheer competitions and to improve upon their routine-based skills. They hope to eventually attend multiple competitions per year, with an end goal of someday competing at nationals.

“We would like to get first place next year, and keep going to the [next] competition,” co-captain Michaela Weber (‘24) said. “We’re hoping to go to Daytona, in Florida, next year, which is like nationals. That would be so exciting.”

Besides furthering the team’s athletic goals, the third place finish in the competition has helped to solidify Luther Cheerleading as a legitimate athletic activity at Luther. Currently, the cheerleading team is considered a club or student organization, but the team hopes to be considered an official competitive team in the near future.

“We’re trying to get more of a sports status,” co-captain Hannah Evans (‘23) said. “We won’t become a ‘sport,’ but we want to up our status from a club to something more, because it is a big commitment, and we are competing and doing a lot. We have practice two or three days a week, games on Saturdays, we travel, and now we’re [starting] competitions, so it goes past just football season.”

This desired athletic status would be more than just a name change. Team members hope that this change would have the potential to shift the current culture surrounding cheerleaders on campus, and allow the cheer team to be seen as a serious athletic pursuit at Luther.

“We want to be taken seriously, and we want the school to see us as a team, a sport, and athletes, because all the stereotypes that exist about cheerleaders rub people the wrong way,” Rice said. “I want us to be presented as athletes who want to compete, who want to do well, who want to represent our school well. I just don’t want people to ever lose sight of [the] fact that we really are here to have fun, to represent our school, and to make athletic events feel more energized.”

Luther Cheerleading will continue working toward further success and campus recognition, but their recent win is an important step for the team.