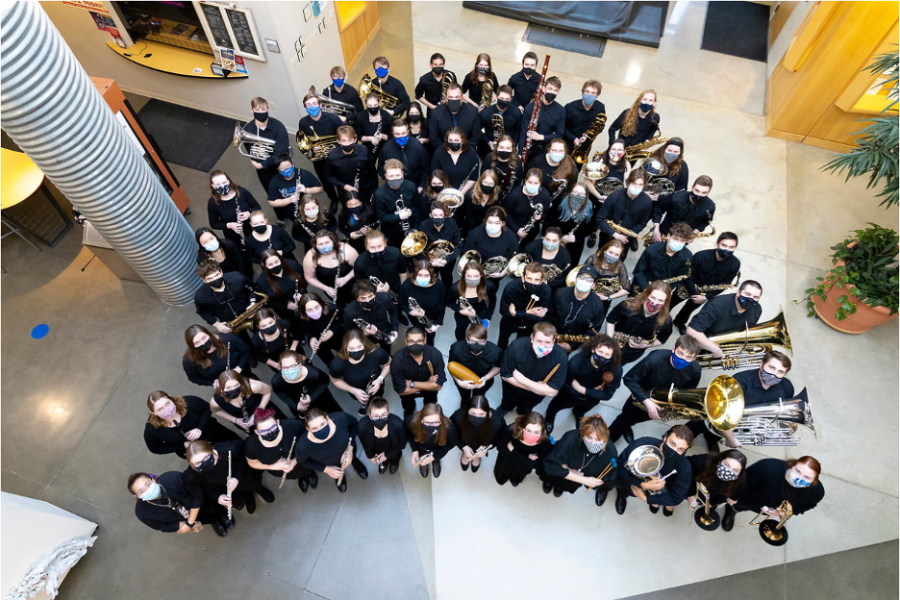 Wednesday, April 18 marked the first spring concert for one of Luther’s newest ensembles. The Symphonic Band, directed by Visiting Assistant Professor of Music Dr. Cory Near, performed a concert at 7:30 p.m. in the Main Hall of the Center for Faith & Life. Those supporters who could not join in person had the opportunity to watch the concert over livestream.

Symphonic Band was first established in Fall 2021, and includes over 70 members. The creation of the ensemble represented a combination of two former groups, the Varsity Band and Wind & Percussion ensembles. The newly created Symphonic Band, together with Concert Band as one of Luther’s two principle bands, welcoming student musicians of all majors. Near leads the group, and he has been known to carefully pick his setlists.

“I always like to have a theme for all of my concerts,” Near said. “These pieces all represent landscapes, not necessarily geographic landscapes, but human landscapes.”

Pieces selected for the program drew inspiration from the concept of “Landscapes,” both physical and experiential. The concert consisted of seven different arrangements, including “Amparito Roca” by Jaime Texidor and “Scenes from ‘The Louvre’” by Norman Dello Joio. More contemporary pieces like “Lux Aurumque” by Eric Whitacre and “A Mother of a Revolution” by Omar Thomas followed. “Spring Festival” by Chen Yi, “Down a Country Lane” by Aaron Copland/Patterson, and “Of Sailors and Whales” by W. Francis McBeth–which included narration by Luther faculty member, Dr. Adrianna Tam–rounded out the set.

The piece “A Mother of a Revolution” served as the initial inspiration for much of the program. Black composer Omar Thomas,  current Professor of Composition at the University of Texas at Austin, created the piece to honor the bravery and sacrifice of trans women, with a special nod to Marsha “Pay it No Mind” Johnson. A trans woman of color, Johnson is credited as a primary instigator of the pivotal 1969 Stonewall Uprising, and is remembered as a tireless advocate for the rights of the LGBTQIA+ community.

“I usually start the program with just one piece that I know I want to include–for this concert, that piece was “A Mother of a Revolution” by Omar Thomas,”  Near said. “It wasn’t necessarily the biggest or most challenging piece, but I knew I wanted the Symphonic Band to have the opportunity to perform it.”

Ensemble member, Olivia Mooney (‘25), is a Nursing Major who serves as the band’s principal bass clarinetist. She expressed excitement over the success of the spring concert, and what it means for the group to perform.

“I think the concerts let us share what we’ve been working on for the past couple weeks, or however many months,” Mooney said. “It’s really cool to have something to show for all our hard work.”

The concert represented the last performances for the 2021-2022 Symphonic Band roster. Near felt that the concert was a good reflection of the band’s growth over the past year, and demonstrated the amount of dedication they had in preparation for the event.

“Symphonic Band played with artistry and confidence,” Near said. “They were enthusiastic when they needed to be, but they were also musical and thoughtful. They played with precision and elegance. I’m very proud of their work.”

The concert also represented an opportunity for students, faculty, and supporters of Symphonic Band to enjoy a live performance. Attendee Steve Hadaway (‘21) stressed the importance of this, and encouraged all students to attend live theater and music performances.

“I attended because my friend is in the band and I wanted to support her,” Hadaway said. “I also think that the effects of music on education can’t be understated. People who are in music ensembles traditionally perform better academically and athletically, so I think it’s important to support [them] by attending.”