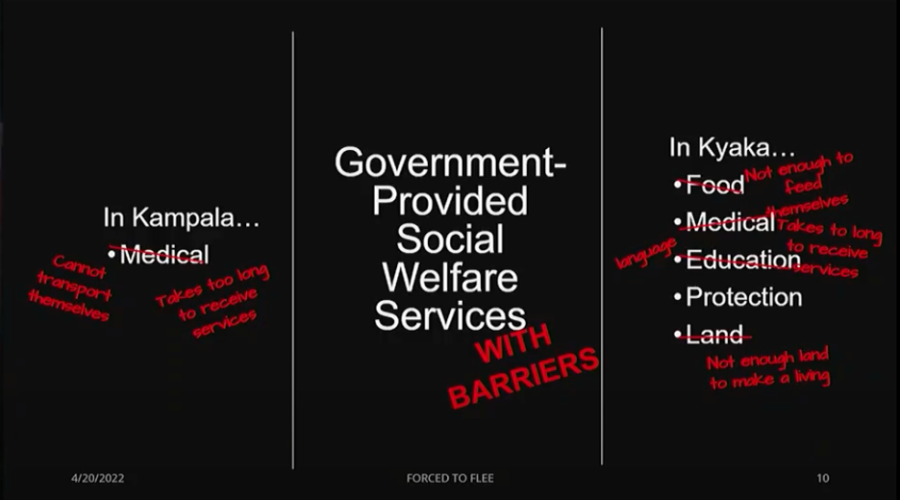 This graphic was part of Sarah Damhof’s (22) lecture “Forced to Flee: Responses to Refugee Issues”, which focused on educating others about the severity of the global refugee crisis. (Graphic courtesy of Sarah Damhof)

The United Nations estimates that the world currently has 26.4 million refugees, around half of which are under the age of 18. This global refugee crisis, where people are forced to flee their homes and lose access to basic rights such as education, healthcare, and employment, continues to worsen as political turmoil displaces the lives of  civilians. One Luther student, Sarah Damhof (‘22), has used her time to educate others on the implications of the refugee crisis. Damhof, an international studies and political science double major, presented “Forced to Flee: Responses to Refugee Issues” on April 20 in Olin 102. The lecture and its accompanying presentation were the final products of Damhof’s senior seminar paper and the research she conducted in Uganda during the fall 2021 semester.

Damhof’s lecture gave an overview of the global refugee movement and information on the major countries of origin for refugees. She presented statistics from the United Nations High Commissioner for Refugees (UNHCR), the Ugandan government regarding the impact of refugee-based programs in Uganda, and also included an overview of her research. She spent a total of one month doing research, including two weeks in urban areas of Kampala, the Ugandan capital, and two weeks in the Kyaka II refugee settlement in the Kyegegwa region. Damhof’s research mostly dealt with comparing the experiences of refugees in multiple environments, and noted that individuals and their governments have a responsibility to address the global refugee crisis – or risk facing the consequences.

“These are humans,” Damhof said. “They are people who have needs and wants and wishes, and a lot of their needs are not being met. My goal by researching them was to look for or develop a solution to at least make their situations a little bit better.”

Damhof’s inspiration for the research came from previous coursework regarding refugee issues. She said she took many classes focused on global development, and traced her passion for the topic back to the people she grew up around and her experiences in the International Studies department at Luther.

“[In my] Introduction to International Studies class I first started to familiarize myself with some of the events and situations that are happening within Africa,” Damhof said. “Additionally, I grew up in St. Cloud, Minnesota, which has a very high Somali refugee population, so I’ve always been familiar with the topic of refugees.”

““[Damhof] really wanted to do something more than just a podcast or only a slideshow,” Wilkie said. “She wanted to do something bigger, because she was so passionate about it and wanted to share her experiences. I think it’s important that we’re all engaging with [each other’s work] and not just seeing [the work of our own department].”

The lecture concluded with an emphasis on the importance of treating all human beings equitably and ways that Luther and Decorah community members can make a difference regarding refugee issues. Damhof shared to attendees that they can call members of Congress or other elected officials to support pro-immigrant policies, or volunteer and donate to local and international organizations. Reflecting on the entire lecture, Payton Lott (‘22) felt Damhof’s research and findings had impacted him.

“Because of the lecture, I feel much more knowledgeable about many problems [relating to the refugee crisis],” Lott said. “I liked that [Damhof] presented tangible solutions to the issues that many refugees must face before resettlement.”