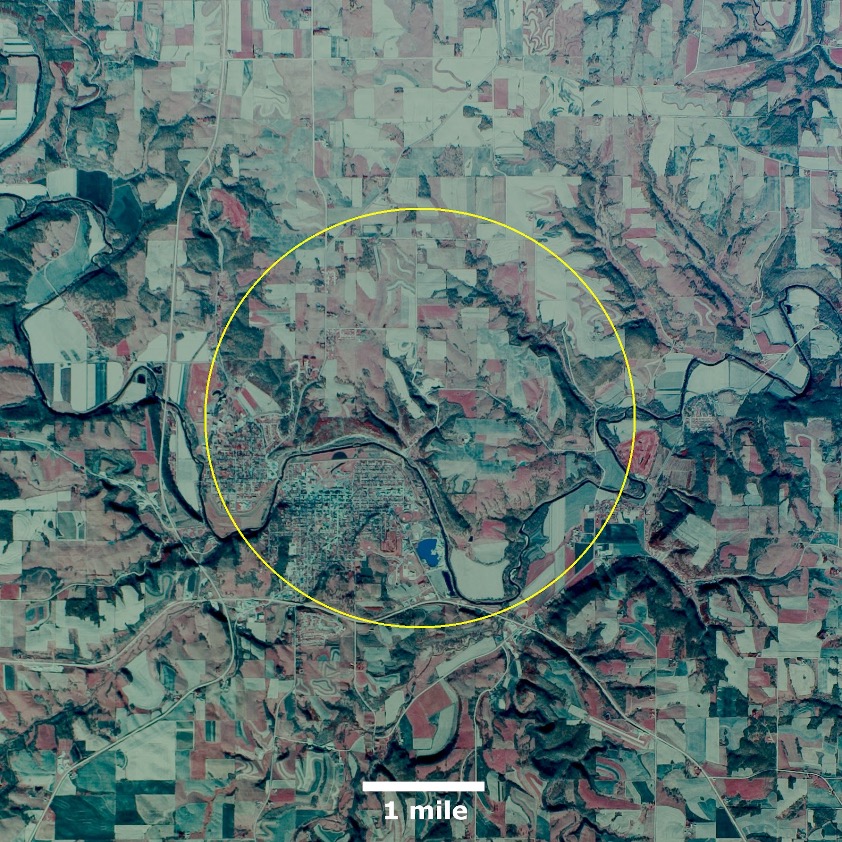 This graphic indicates the approximate size of the Decorah Crater in relation to a 1980 United States Geological Survey air photo of the city of Decorah. (Photo courtesy of Public Domain)

The Valders 206 lecture hall was filled to near-capacity with students, faculty, and Decorah residents on Wednesday, April 20, as all were gathered to hear retired geologists H. Paul Liu and Robert McKay offer their highly anticipated “Crater Talk”. The talk explained the history and significance of what has come to be known as “The Decorah Crater”, a buried impact crater from a meteorite strike 470 million years ago.

The event was organized by Luther’s Environmental Studies department. Associate Professor of Environmental Studies and Chemistry Laura Peterson said that community engagement and interest in the crater was clear throughout the entirety of the talk. She said she was very happy with the turnout for the event.

“Over the last few years, there has been growing awareness within the Luther and Decorah communities about the Decorah Crater,” Peterson said. “It was really great to see so many people interested in learning more about how it was discovered and about the amazing and unique fossils preserved in the crater basin.”

McKay and Liu, who both were previously employed with the Iowa Geological Survey, shared the story of the crater’s discovery over time. According to the two geologists, the crater is believed to have been created after a 650 foot meteorite struck what would become the eastern edge of Decorah. The resultant impact is estimated to be 3.5 miles in diameter.

In the morning prior to arriving on campus, the geologists participated in an interview with Iowa Public Radio (IPR). They talked with host Ben Kieffer on an episode of “River to River,” detailing the same findings that they presented in Valders later in the day.

“The size of the crater that is present beneath Decorah today is smaller than the original crater, because there has been erosion throughout past geologic time periods,” McKay said in the interview. “All we have left today is a crater that is 600 feet deep. It was probably deeper than that upon impact, but the bottom would have eroded.”

The crater is invisible from the earth’s surface due to millions of years worth of sedimentation. Indications of the crater were originally discovered by the late Jean Young, a Decorah-area resident and independent geologist. Both Liu and McKay credit Young with bringing attention to the unusual geological features that denoted the meteor impact site.

“[Young] maintained an active interest in the geology of Northeast Iowa, and particularly Winneshiek County,” McKay said. “She was interested in mapping a couple sandstone units up there, so she kept track of data from area well drillers. She contacted me at the [Iowa Geological Survey], and we started the process by looking at unusual shale formations.”

The Decorah Crater is also notable from a paleontological standpoint. Fossilized conodonts – now-extinct vertebrates resembling modern eels – were found within the shale. These creatures would have lived 500 to 200 million years ago. The findings of these creatures influenced Liu to join the study.

“The fossils found can provide much more information on early animalian structures and living environments,” Liu said. “The conodonts were important as they helped us determine the structures’s age, but from there we still spent two years investigating if this was a crater.”

Much of the geologists’ talk revolved around findings from a large-scale study of the crater. The study was supported by the National Science Foundation, the University of Iowa, Luther College and Winneshiek County, among others. Liu and McKay also extended special thanks to county land owners who allowed researchers to study portions of the crater on their property.

Those interested in learning more about the Decorah Crater can listen to the episode of “River to River” here. The episode also features a discussion between host Kieffer and Aaron Sadow, a chemist in the U.S. Department of Energy’s laboratory in Ames, Iowa.