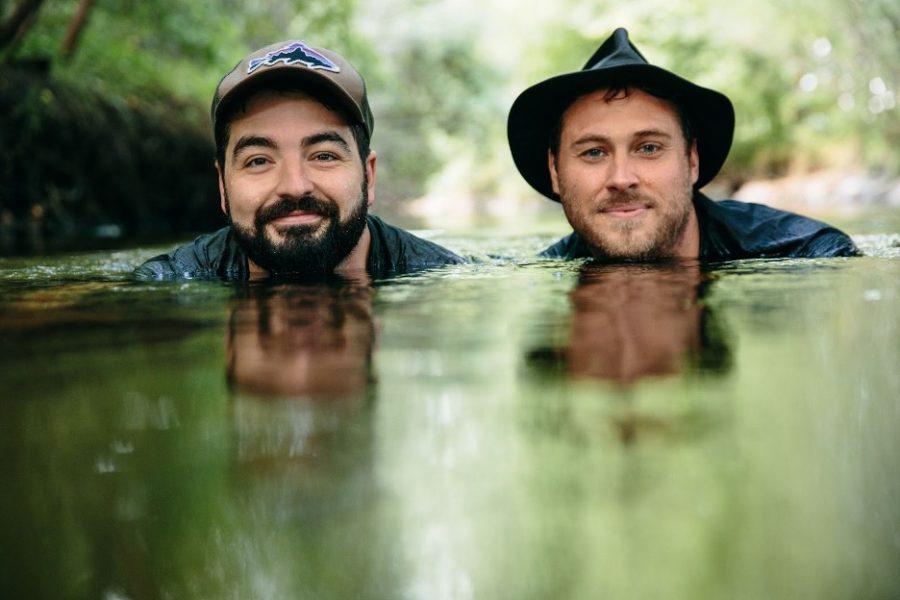 While each ticket sold by the Ticket Office assigns a concert-goer to a single seat, few people could resist flooding the aisles of the Center for Faith and Life’s Main Hall to grab a partner and dance last Saturday.

On April 23, the Grammy Award-winning bluegrass duo the Okee Dokee Brothers performed for the Center Stage Series’ 2022 Family Concert. The Okee Dokee Brothers consist of life-long friends Joe Mailander, who plays the acoustic guitar, and Justin Lansing, who plays the banjo. During the 60-minute set, families from both Decorah and surrounding communities were taken on a musical tour of the natural world as the duo performed songs such as “Through the Woods,”, “Can You Canoe?,” and “The Bullfrog Opera.”

Mailander and Lansing have been friends since their shared childhood in Denver, Colorado, but are now based out of Minneapolis, Minnesota. Being fans of prominent folk singers Woody Guthrie and Pete Seeger, they formed their first folk band in high school and have been performing as the Okee Dokee Brothers for 14 years. Mailander points to their childhoods spent outdoors as a source of inspiration for their music.

“A lot of our tunes have to do with the outdoors, so when we started playing music in high school, our first songs were about the outdoors and nature,” Mailander said. “We’ve kind of continued that and started the Okee Dokee Brothers about [14] years ago and have been singing about our shared memories from childhood and the outdoors ever since.”

Known for their traditional folk style and old-time music, Mailander and Lansing incorporated the audience into much of their performance through call and response, dance, and a fill-in-the-blank rhyming song. The audience was even treated to a collaborative song performed by both the duo and a group of Decorah students and parents. Throughout the set, parents and children alike were dancing in the aisles and jumping in front of the stage. Mailander and Lansing’s experience performing for such energetic crowds was evident in their deliberate mix of fast-paced and slower songs.

Luther student Olivia Gustafson (‘25) attended the Saturday performance. She had seen the group in concert once before, but saw them in a different light now that she is seeking a career in education. She pointed to the children’s reaction to the duo.

“After going to see them today and seeing them really pump up the audience, I loved that,” Gustafson said. “I loved seeing all the little kids get super excited and happy and dancing around. We saw kids breakdancing, and they were so cute.”

The Okee Dokee Brothers’ appearance at Luther was presented in celebration of Earth Day and Climate Justice Weekend. Along with their nature-themed songs, the duo also featured videos of their own outdoor adventures, such as their canoe trip down the Mississippi River and their dog sledding trip through the Boundary Waters Canoe Area Wilderness in Northern Minnesota. Additionally, before and after the concert, Luther College Sustainability held a gnome hunt to get the visiting families active outside. These connections to Earth Day were a source of excitement for Performing Arts Committee (PAC) publicist Ruby Langholz (‘24).

“I’m excited because it’s going along with the climate awareness for Earth Day, and I think that’s a fun way to do it with songs and connecting people with nature,” Langholz said. “I hope that it makes people think about that and maybe inspires people to go on a walk.”

Compared to the other groups who were in the line-up for the 2021-2022 Center Stage Series, the Okee Dokee Brothers were unique with their younger target audience. While some Luther students like Gustafson knew the band growing up, the Okee Dokee Brothers had something to teach all Luther students who were in attendance. Current PAC Secretary and President for the 2022-2023 school year Jocelyn Demiglio (‘24) points to the fun that can be found in music.

“Something valuable that Luther music students can learn is that music doesn’t have to be serious,” Demiglio said. “You can be passionate about it and still have fun. I think that’s something that is not broadcasted widely here at Luther.”