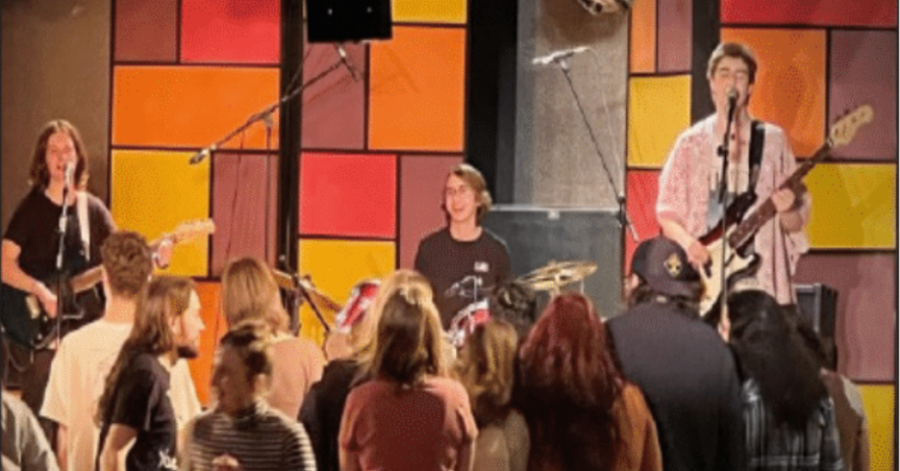 Marty’s, a location known to be a good study spot in the afternoons and evenings, was not the place to effectively finish any senior projects or Paideia papers last Saturday night. The bass was thumping and the crowd was dancing as one of Luther’s own student bands took the stage.

On April 30, the three-piece student band Holding Hemlock performed for a crowd of their peers on the Marty’s stage. The band consists of lead vocalist and guitarist Spencer Cameron(‘24), drummer Micah Miller (‘23), and bassist Jack Kates (‘24). During the 60-minute set, the trio performed a mix of original and cover songs, such as “Are You Gonna Be My Girl” by Australian rock band Jet.

As the clock struck 8:00, Cameron took the stage with his guitar to get the concert started. Kates joined Cameron for the second song, with Miller completing the trio for the third and subsequent songs. Between original compositions, Kates clued the audience into his sources of song-writing inspiration, such as the recent birth of a friend’s son, the animated show “BoJack Horseman,” and valuable friendships. Throughout the set, the trio frequently interacted with the audience, bantered with the soundboard technician, and prompted the audience to give an energetic welcome to Kates’ parents, who were in attendance.

Cameron, Kates, and Miller were introduced to one another by Cameron’s roommate, Siobhan Dunn (‘24), a mutual friend of all three. The trio began making music during this past J-term after connecting over bands like My Chemical Romance and Maximum the Hormone. There was not a defining moment, however, that the trio points to as the start of “Holding Hemlock.”

“There was no ‘we’re going to be a band now, I do declare,’ you know what I mean,” Kates said.“It sort of just happened.”

While Holding Hemlock’s sound is largely based in alternative rock, they also drew from the genres of hard rock and folk during their set. Along with their mixing of genres, their primary arrangement of instruments is also unique. The majority of the set featured Cameron on vocals, Miller on drums, and Kates on bass.

“Most of the stuff that we’ve collectively written as a band is definitely more like rock or hardrock,” Miller said. “It’s also interesting because that stuff, the harder stuff that we have, is just bass, drums, and vocals, which I feel isn’t a super common sound.”

With classical music being prevalent on campus due to the presence of many different ensembles, that variety is an appreciated change of pace. Olivia Gustafson (‘25) heard about Holding Hemlock through a friend and attended the concert. As a member of the Luther College Philharmonia, Gustafson points to the importance of diversity in the Luther music scene.

“I think it’s just a nice variety,” Gustafson said. “Classical music is good, but you do need to have some sort of variety; otherwise, it does get kind of same old, same old [and] boring in a way.”

To further grow the music scene at Luther, Holding Hemlock advises that interested musicians get in contact with any of the staff members at KWLC radio. Located in the basement of the Dahl Centennial Union, KWLC has a recording studio and other resources available to students. As next year’s recording studio technician, Cameron points to direct messaging the KWLC Instagram account (@kwlc1240) as being an effective way for students to access these resources.

“I feel like the more populated that space can be, the more prominent the music scene will be here,” Cameron said. “I think a lot of people don’t know that you can record down there. I’ll be working there and doing that next year.”

As of now, Holding Hemlock has no future performances planned, but they are interested in exploring opportunities at this summer’s Nordic Fest.