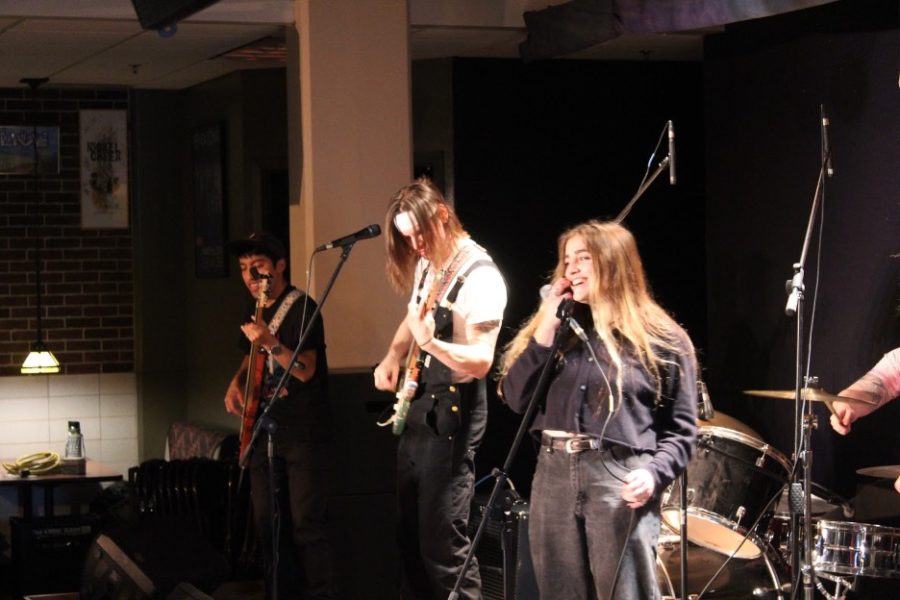 This was not your average block party—definitely not the kind one might find in a quiet little town or suburb. Instead from 1 p.m. to 5 p.m. raging vocals, waves of guitar riffs, and a booming drum set rumbled across the Marty’s dance floor as Luther students moved to the beat and let themselves go.

The KWLC Block Party event was held in Marty’s on Saturday April 30th, featuring sets from Killed by Kiwis, Holding Hemlock, Tragic Youth, and The Shackletons. With COVID-19 limiting large scale events like this the past couple years, the last block party was thrown back in spring of 2019, so KWLC Station Manager Asher Smith (‘22) was excited to have another one before his graduation in May.

“We usually try to do two big concerts,” Smith said. “We do Rock the Commons in the fall, and the block party in the spring. We haven’t been able to do a block party since my freshman year because of COVID, so we were super pumped to bring it back.”

The block party was opened by the Minneapolis-based band Killed by Kiwis. As the first to perform, the group had the added task of getting people excited and out on the dance floor, setting the tone for the rest of the event. The group came out strong and had no difficulties doing just that, as their music, hair flipping, and energy successfully riled up the crowd. Killed by Kiwis guitarist Frankie Carlson reflected on his performance, and what he loves most about sharing their music with others.

“We’re a big band of best friends, and it’s so fun to be up there and show other people what we’ve worked on,” Carlson said. “I have the most fun just looking around at [the band], and just locking in and having a good time—I wouldn’t trade that for the world.”

After Killed by Kiwis, Holding Hemlock gave their debut public performance, keeping up the crowd’s energy with their vocals and stage presence. Holding Hemlock singer and guitarist Spencer Cameron (‘24)  expressed similar appreciation to Carlson for the comradery that comes with creating and sharing their bands’ music, particularly as we begin to leave the restrictions of the pandemic.

“It’s definitely the catharsis of it for me,” Cameron said. “I feel the most myself when we’re together performing. It’s just a lot of fun—getting people together is such a cool thing to see, and it’s so good that we get to do it now.”

Tragic Youth was next to perform their set, which included a cover of Nine Inch Nails’ “The Hand that Feeds.” When lead singer Ian Wreisner’s (‘22) mic cut out, the crowd joined in and sang along, making audience members even more involved in the show.

The Shackletons was the final set of the block party, and performed various songs, including their new song “Chateau,” which they recently recorded. The Shackletons lead singer Colin Campbell told the audience that he always passed through Decorah when he visited his grandparents, but this was the first time he had ever come to Luther’s campus.

The Shackletons closed out the event performing “Minnesota Girls,” bringing more dancers onto the floor. Students let themselves loose in the audience, ending the event as it first began.

The block party event was welcomed by students, who have the pressure of upcoming graduation and final exams. Jessica Trygstad (‘24) is in the symphony orchestra at Luther, and like members of the bands that performed, Trygstad is familiar with the sense of playing music in an ensemble.

“I’m really glad that we’re at this point where everybody feels safe enough to either wear a mask or not wear a mask, and it’s really nice to enjoy music with people again,” Trygstad said. “We get to do that in orchestra, but this is a different vibe and I’m very thankful. It’s nice to go out and do stuff.”

For some attending, this was their first live concert in Marty’s ever. With low COVID-19 levels on campus and much of the world opening back up again, Lani Himegarner (‘24) found the block party to be enlivening after two years of social distancing and shutdowns.

“I’ve never gotten to see a concert in Marty’s before, but I always heard that was a thing, so it’s really cool to actually see it happen,” Himegarner said. “It’s really refreshing, especially coming off of last year where it was just studying, when you couldn’t really leave your dorm building—to now, getting to go everywhere and actually getting to experience social events. It’s fun to just let loose.”

While this was KWLC’s last event for this semester, there are other opportunities for students to get out and experience art, including the spring opera performance on May 6 and 7, and Shakespeare in the Park happening on May 8 in the CFL Main Hall. In the meantime, KWLC will continue to provide jams for students to let loose and vibe to until summer arrives.