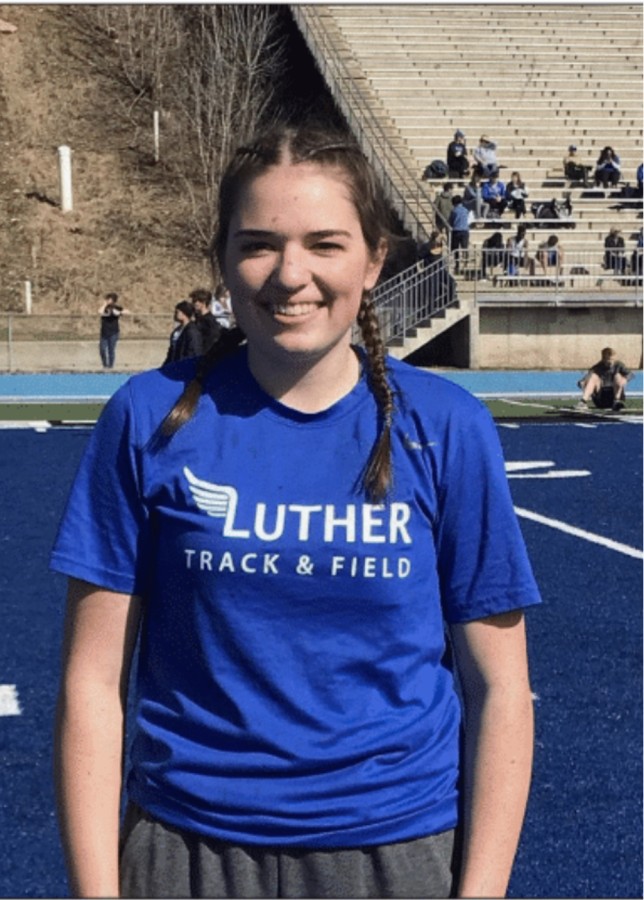 Mya Ploor (‘24) has been selected as this week’s Norse of the Week. Ploor competes with the women’s volleyball team and the women’s track & field team here at Luther. She competed at Luther’s Norse Invite Indoor track meet on April 9, 2022, where she set a new school record for pole vaulting, clearing the bar at 10 feet, 5 and 1/4 inches. This broke the 22-year old record held by Tara Sjostrom (10 feet, 4 and 3/4inches), established in 2000. Ploor is in her second year on the track team here at Luther, and look forward to competing in future seasons.

What led you to become involved in pole vaulting?

I’ve been a gymnast since preschool, and my dad was the pole vaulting coach at our local high school. In eighth grade I would go to some of the high school practices and started trying it out then. I ended up pole vaulting from then on, so my dad was my coach for about five years before I came to Luther.

What led you to pursue pole vaulting at Luther?

I actually didn’t intend to pole vault when I came to Luther. I came in as a sprint distance runner, and didn’t know how it would work with my major. I started in music education, but now I’ve switched to music performance. Coach Doreen actually approached me because she noticed that I had vaulted in high school, and asked if I wanted to try pole vaulting here. I had enough time, so I really didn’t see why not.

Do you compete in any other events with the track team?

Yes, I also do the open four-hundred and the four by four races.

What was it like to compete on the track team this season?

It was very different from last year. We were able to finally compete, at least for indoor track, with non-conference teams. Last year we could only compete within our conference, so there were usually only three teams at a meet. It’s been really nice getting to go to some really big meets and seeing some really good competition, on top of just getting to go to more meets.

What’s your favorite thing about being on the Track & Field team?

I would say the people. Like I said, everyone is just really great. We’re all in different academic areas so it’s good being able to come down to the track and have the team in common, because otherwise I would have never met them. They’re such amazing people, and it’s so fun to compete with them.

Who in your life do you look up to?

Our pole vaulting squad is great because we all help each other and learn from each other. Everyone is looking out for each other, which is really awesome. On the academic side, Dr. Hester, my flute professor, is so supportive. She always asks when my track events are so she can come watch. Having the support of my professors, as well as my teammates and coaches, is just phenomenal.

How do you balance your time between sports, activities and academics?

It can be a lot, but I’m more used to it from high school. I was involved in a lot of things then too, so transitioning to college was pretty similar. The coaches have been really understanding too. I’ll let them know I have a music rehearsal until 4:00 and they’ll let me head to practice at 4:15. On Sundays I can’t make it to practice because of rehearsals and seminars, so they’ll even let me come to the gym at 10:00 and help me with the workout then. They’ve been really accommodating with that, which was unexpected but very, very appreciated.

Do you feel like skills you gain in sports have helped you with academics?

Are there any impactful moments in your vaulting career that stand out to you?

I broke the indoor record this year for pole vault at our conference meet, which was really unexpected. My goal was to clear 10’ and I cleared a little over 10’ 2’’. That was really unexpected but exciting, and was a moment when things started to click. Pole vaulting is very technical and hard to get things to click at the same time. I still have things I’m working on. I ended up placing at the indoor conference, which I didn’t expect coming in because I wasn’t ranked to place. Breaking the outdoor record was another unexpected moment. It was my first outdoor meet, and I had just gotten my wisdom teeth out, so it was my first week back to campus. Rob, who usually runs the pole vaulting, is so supportive and always giving advice, so that was really great to be able to do that at our home meet. Last meet I broke my own record again, which was unexpected because I didn’t even know what height I was jumping at. It’s just great because we have such a great team, and they’re always helpful and supportive.

What does it mean to you to have now broke the school pole vaulting record multiple times?

It’s weird to think about doing that — it’s still just really surreal. I know the last record for outdoor stood for 22 years, so I keep thinking “there’s no way”. We’re all getting better as a vaulting team though, soI wouldn’t be surprised if in a few years somebody else breaks the record again. It’s great to see our improvement over the years, especially in women’s pole vaulting.